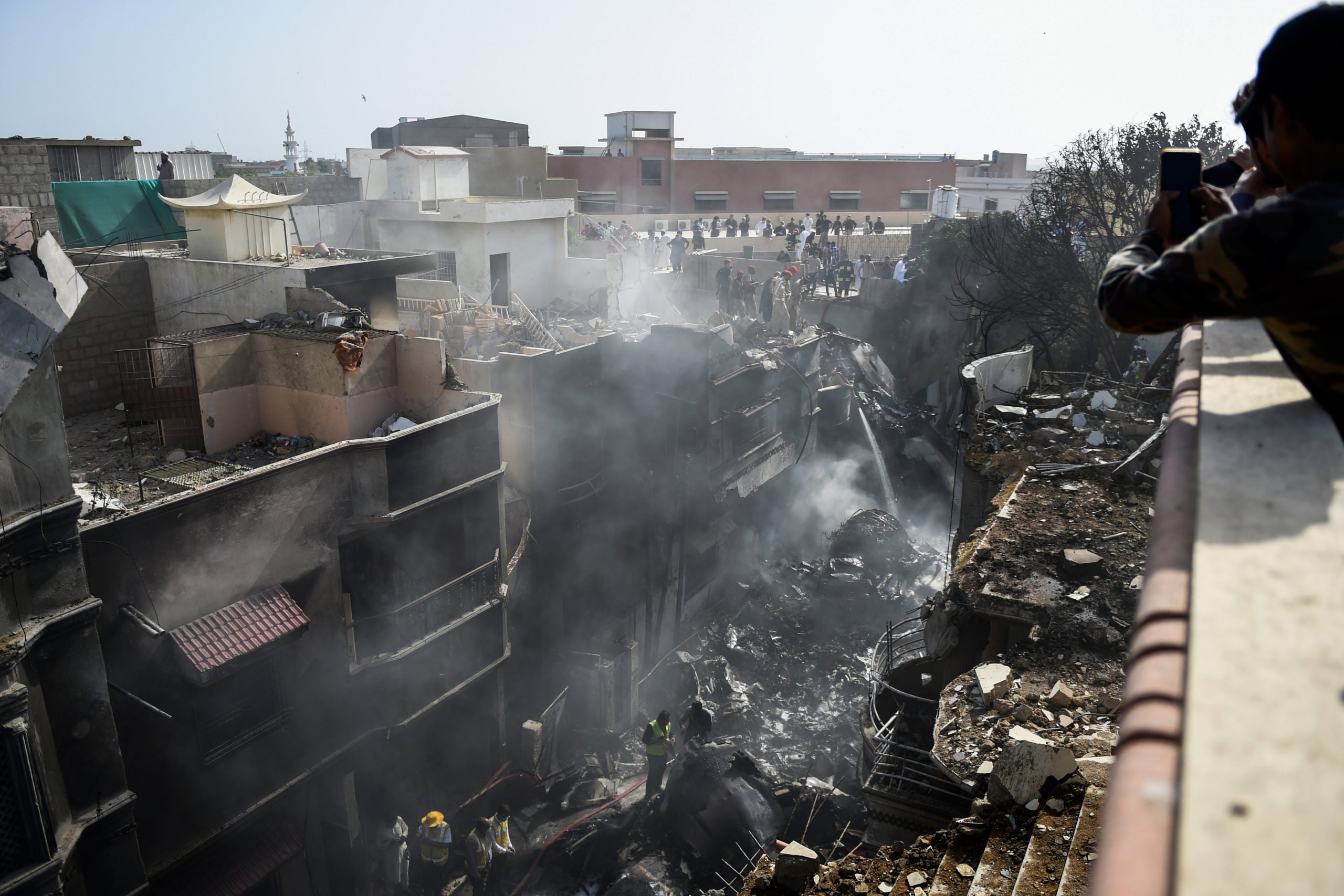 KARACHI, Pakistan — A total of 80 bodies have been recovered after a Pakistani plane crashed with nearly 100 people on board in the southern city of Karachi on Friday, provincial health officials said in a statement, with more feared dead.

The Pakistan International Airlines (PIA) plane had made multiple approaches to land at the city’s airport when it came down among houses, devastating buildings and killing several people on the ground.

The official statement confirmed two survivors and said that 17 of the bodies had been “identified so far.”

Earlier the airline’s chief executive Arshad Mahmood Malik said in a press conference that only one survivor had been confirmed from the wreckage — the president of the Bank of Punjab, Zafar Masud.

He added that the full clearance operation could last two to three days.

Efforts on the ground will be ongoing “until we get all the bodies recovered,” a provincial official who asked not to be named told AFP. “So far 80 bodies have been recovered from the debris.”

Plumes of smoke were sent into the air as rescue workers and residents searched the debris for people and as firefighters tried to extinguish the flames. An AFP reporter witnessed charred bodies being loaded into ambulances.

Sarfraz Ahmed, a firefighter at the crash site, told AFP the nose of the Airbus A320 and the fuselage had been heavily damaged by the impact, adding that rescuers had pulled bodies from the aircraft who were still wearing seatbelts.

The disaster comes as Pakistanis prepare to celebrate the end of Ramadan and the beginning of Eid al-Fitr, with many traveling back to their homes in cities and villages.

PIA confirmed there were 91 passengers and seven crew on board the flight, which lost contact with air traffic control just after 2:30 pm (0930 GMT) traveling from Lahore to Karachi.

“It was an (Airbus) A320 which is one of the safest planes. Technically, operationally everything was in place,” Malik said, adding the plane was bought by the airline in 2014.

The pilot, Sajjad Gull, who according to an official release was the senior-most A320 pilot with extensive flight experience, complained of a problem after making his second approach to the runway, before air traffic control lost contact with him.

Airbus later said in a statement that the plane had first entered service in 2004 and was acquired by PIA a decade later and had logged around 47,100 flight hours.

The plane had developed a technical fault, according to interior minister Ijaz Ahmad Shah who said the pilot issued a mayday call after the craft lost an engine.

Residents near the scene said their walls shook before a big explosion erupted as the aircraft slammed into their neighborhood.

“I was coming from the mosque when I saw the plane tilting on one side. The engines’ sounds were quite weird. It was so low that the walls of my house were trembling,” said 14-year-old witness Hassan.

Karachi resident Mudassar Ali said he “heard a big bang and woke up to people calling for the fire brigade.”

Pakistan Prime Minister Imran Khan said he was “shocked and saddened” by the crash, tweeting that he was in touch with the state airline’s chief executive.

“Prayers & condolences go to families of the deceased,” he wrote on Twitter.

The Pakistan military said security forces were deployed to the neighborhood and helicopters were used to survey the damage, while offering condolences over the “loss of precious lives.”

US Secretary of State Mike Pompeo tweeted that his “prayers go out to those killed and injured, and their families,” and added that the United States “stands with Pakistan during this difficult time.”

Commercial flights resumed only days ago after planes were grounded during a lockdown over the coronavirus pandemic.

Pakistan has a chequered military and civilian aviation safety record, with frequent plane and helicopter crashes over the years.

In 2016, a Pakistan International Airlines plane burst into flames after one of its two turboprop engines failed while flying from the remote north to Islamabad, killing more than 40 people.

The deadliest air disaster on Pakistani soil was in 2010 when an Airbus A321 operated by private airline Airblue and flying from Karachi crashed into the hills outside Islamabad as it came into land, killing all 152 people on board.

An official report blamed the accident on a confused captain and a hostile cockpit atmosphere.

PIA, one of the world’s leading airlines until the 1970s, now suffers from a sinking reputation due to frequent cancellations, delays, and financial troubles. It has been involved in numerous controversies over the years, including the jailing of a drunk pilot in Britain in 2013.