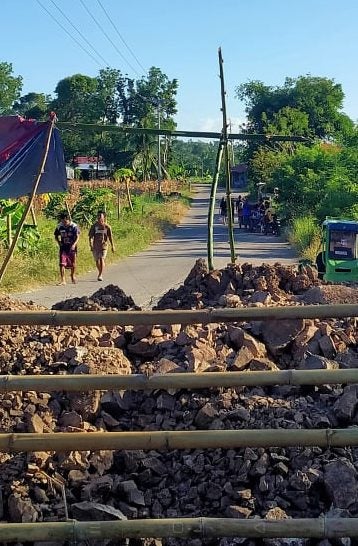 NO ENTRY A stockpile of soil and rocks in the village of Candual in Panay town, Capiz province, prevents people from crossing to Roxas City. —PHOTO COURTESY OF JACKIE BERDUGO

ROXAS CITY, Capiz, Philippines — Piles of soil and rocks, as high as 1.2 meters (4 feet), are blocking some entry points to this city, including a bridge, to control the entry of people to the provincial capital of Capiz.

Mayor Ronnie Dadivas decided to barricade several roads leading to the neighboring town of Panay to stop travelers from avoiding checkpoints along the main roads.Roxas is on enhanced community quarantine after Capiz recorded its first positive case of new coronavirus disease (COVID-19) on March 24.

A 45-year-old employee of the provincial board, a resident of Jamindan town, showed COVID-19 symptoms on March 12, about a week after arriving from Metro Manila.

He was classified as a person under investigation on March 16 after he was held at a checkpoint at the border of Ivisan town and Roxas. A thermal gun check showed he had high body temperature.

A staff member of the Research Institute for Tropical Medicine in Metro Manila informed the office of Gov. Esteban Evan Contreras about the test results of the employee, prompting a lockdown on the capitol on Wednesday morning.

“[The barricades] are intended for noncity residents because we have monitored many using these … secondary roads to [avoid] our border checkpoints,” Dadivas told the Inquirer.

The mayor issued an executive order to establish “health border controls” along the city boundary in the villages of Lonoy, Balijuagan, Lawaan, Milibili, Adlawan and Banica. The checkpoints are manned by 216 policemen, village watchmen and barangay health workers working daily in eight-hour shifts.

Dadivas later ordered that stockpiles be put up in Barangays Bago, Bato and Loctugan to prevent motorists from using these routes as there was no one guarding there.Difficulties

Some residents have complained though that the barricades had made it more difficult for them to get food and other basic needs.

They questioned the effectiveness of the roadblocks, noting that while vehicles could not pass through, people could still go over the piles.

In unwatched borders, tricycle drivers would simply push their vehicles over the roadblocks.