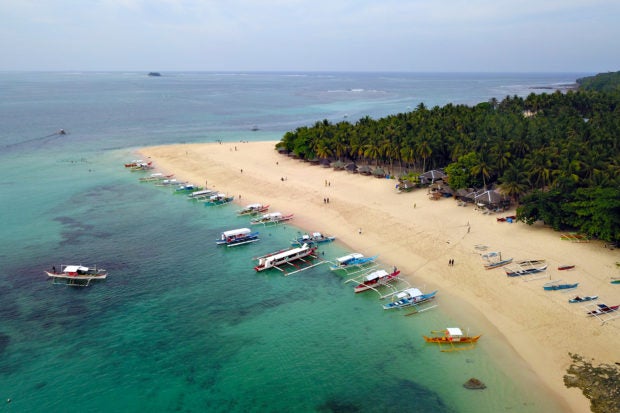 BUTUAN CITY, Agusan del Norte, Philippines — What will you do if you are stuck in paradise while the rest of the world is busy fighting an infectious disease?

For the more than 700 local and foreign tourists stranded on Siargao Island, it depends on the depths of their pockets.

They were not able to leave the island before the Surigao del Norte provincial government, on March 18, imposed a community quarantine as a precaution against the spread of the new coronavirus disease (COVID-19). By then, sea and air travel to and from the province were suspended until April 12.

Gov. Francisco Matugas also ordered the closure of Surigao to nonresidents and visitors.

Mary Jean Camarin, the Department of Tourism (DOT) director in Caraga region, said they had airlifted 416 foreigners from the island, a tourist haven popular for its surfing spots and white sand beaches.

Camarin said five flights were arranged by the DOT and the Surigao del Norte government on March 20 and 21, bringing tourists from Sayak airport in Del Carmen town to Clark International Airport in Pampanga province

They were then taken by bus to Ninoy Aquino International Airport, said provincial administrator Zander Plaza.

As of Monday, Camarin said at least 700 remained in Siargao, and the provincial government was expecting the number of tourists to increase as authorities rounded up resorts and residences for stay-at-home tourists.

Their embassies have been communicating with them for updates about their citizens, Camarin said.

Raquel Penaso of Bulacan province, who came to the island with eight members of the family, including an elderly and a 3-year-old child, is concerned that they might run out of money if they stayed longer.

She said her mother might also miss her regular medical checkup.

The Penaso family flew to Siargao on March 16, with their return flight scheduled for March 19.

Eunice Angeline Palmea of Olongapo City said her vacation with her husband had turned into a disaster as she worried over the children they had left at home, the youngest at 2 years old.

“Problems might arise at home and there is nothing we can do to help them,” she said.

Many tourists in Siargao have transferred from resorts to houses of locals as homestay guests. They find it difficult to buy food and other necessities, depending on their hosts for their meals, because the local government was not issuing them quarantine passes for them to go out.

“Residents here had been issued passes [but] we were excluded so we cannot go outside … to buy our food [and we cannot even] cook our meal,” said a tourist named Francis.