TOKYO, Japan – “Cupid’s avocado” for dinner, heart-shaped messages for the crew, but also painful separation: for those trapped on board the quarantined Diamond Princess cruise ship, Friday is no ordinary Valentine’s Day. 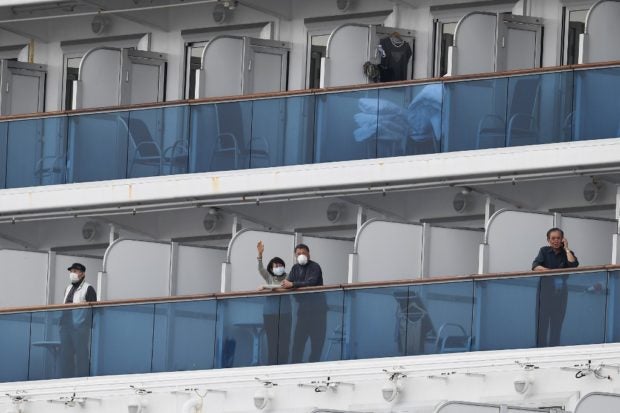 Passengers look out from their balconies on the Diamond Princess cruise ship, with around 3,600 people quarantined onboard due to fears of the new COVID-19 coronavirus, at the Daikoku Pier Cruise Terminal in Yokohama on February 14, 2020. – The Diamond Princess cruise ship off Yokohama has become the single largest cluster of cases outside China, with at least 218 testing positive for the COVID-19 virus and taken to medical facilities. (Photo by CHARLY TRIBALLEAU / AFP

Wearing a red dress and a red hair tie, the ship’s entertainment manager Natalie posted a Valentine’s Day video on Twitter to try to keep spirits up.

“I just wanted to check in with everybody and say that we are all hanging in there, doing fine and keeping together as a big family,” she said, admitting with a smile: “This hasn’t been my regular attire for the last week or so.”

Passenger Matt Smith, 57, was marking Valentine’s Day on board with his wife of 21 years, Katherine Codekas, also 57 — and admitted this was not their first-choice location for the special day.

“After 21 years of marriage, we don’t make a big deal of it, but I usually get Katherine a card at least,” he told AFP from the ship.

“I think she was a little disappointed with our setting,” he added. “Facebook reminded me this morning that three years ago we were in Las Vegas. Way to rub it in!”

Passengers on board were being offered a “Valentine’s Day” breakfast, Smith said.

“We were reminded what day it was by the delivery of what the crew member said was a ‘special’ breakfast,” he said.

“Not sure why hard-boiled eggs, sausage, and sauteed mushrooms are special.”

The dinner menu, on the other hand, promises several special treats in honour of the day.

The main course is the French classic Coq au Vin with mashed potato and vegetables, and a “Valentine’s Day surprise dessert of the day” is promised.

“Coq au Vin, yes please,” tweeted Yardley Wong, who has been posting her efforts to keep her young son entertained on the quarantined vessel.

“A special meal for Valentine’s Day, a reserved bottle of red,” she added, with her usual hashtag #hanginthereDiamondPrincess and a picture of a bottle of wine.

She also posted a drawing by her six-year-old son for Valentine’s Day, with the caption “Stay strong, we are with you Diamond Princess.”

– ‘Then she was gone’ –
American passenger Jackie joked that she had big plans for Valentine’s Day on the cruise, which has proved far from the gala holiday everyone planned.

“We’re going to have a formal night on Valentine’s Day in our cabin. Take some pics, have some laughs,” she tweeted.

Another passenger cut out paper hearts and left them on her door for the crew to read, with messages including: “Thank you for all your hard work” and “Thank you for taking care of us.”

More than 200 people on board the ship have been diagnosed with the newly named COVID-19 and taken to local hospitals. Those remaining on board will be in quarantine until at least February 19.

While passengers are battling isolation, fear and boredom, some members of the crew have voiced concerns about their conditions, including eating together and sleeping two to a cabin.

But the coronavirus has also ripped some couples apart for Valentine’s Day, including at least one on their honeymoon.

Kent Frasure was forced to say goodbye to his partner Rebecca, who has contracted the virus and is now in isolation in hospital.

“We said ‘goodbye, see each other later’ and gave each other a hug. We didn’t have a goodbye kiss because we didn’t really know what was going on,” Kent told CNBC.

“Then I watched her walk down the hallway, turn the corner and then she was gone.”