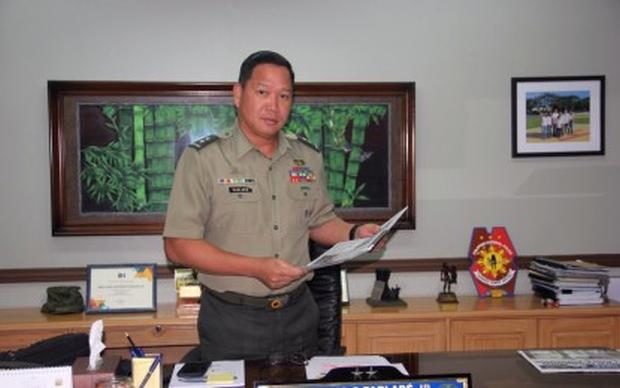 LUCENA CITY—The spokesperson of the National Task Force to End Local Communist Armed Conflict (NTF-Elcac) has accused the Commission on Human Rights (CHR) of siding with the Communist Party of the Philippines (CPP) and its front organizations.

“Why would CHR listen to the lies of CPP front organizations and ask for the cancellation of Executive Order [No.] 70?” Maj. Gen. Antonio Parlade Jr., also commander of the military’s Southern Luzon Command (Solcom) asked in a letter to CHR spokesperson Jacqueline de Guia.

Parlade said the task force had been “providing avenues for the delivery of basic services and the promotion of good governance, especially at the most isolated and depressed communities of the country.”

“But the CHR has chosen to see these sincere efforts of government as aggression and harassment of radical groups critical of the government,” he said.

Signed by President Duterte in December 2018, EO 70 formed the NTF-Elcac and tapped government agencies and the private sector to bring basic services to the countryside and address the root causes of rebellion.

Parlade said the CHR “continuously parrots the lies” of CPP front organizations, “in synch with the United Nations Commission on Human Rights investigation” of alleged crimes of the government under Mr. Duterte.

“Maybe we should educate CHR about the CPP’s design in order to enlighten them about how the CPP exploits us all—the CHR included,” he said.

‘Rescind EO 70’He added: “If there is anyone who is adept at weaponizing the law and using government resources against government, that would be the CPP.”

Parlade asked De Guia: “Shall government abdicate its sacred duty to protect and defend its citizens and continue to allow these critics and dissenters to recruit and kill our children?”

On Sunday, the CHR renewed its call to the government to rescind EO 70, which formed a task force to end “local communist armed conflict,” following several attacks against human rights activists this year.

The appeal was made days after the arrest of a journalist and four activists in Tacloban City on charges of illegal possession of firearms and explosives.

“We petition the government to rescind the policy, as it has been consistently used to justify threats and intimidation of individuals and organizations working for the improvement of human rights and welfare of various marginalized, disadvantaged and vulnerable sectors of society,” De Guia said in a statement.

The CHR also called on the government to “immediately end all forms of violations against human rights defenders and recognize the legitimacy and importance of their work.”