BALETE, Batangas –– Residents here had gone back to the volcano island on Tuesday to rescue whatever animal, like horses, cows, and pigs, that may have survived the thick ashfall that has now enveloped the entire island.

Aside from fishing, residents on the volcano island made a living from raising livestock and offering horse rides to tourists ascending the Taal Volcano’s crater.

But all was lost following Sunday’s eruption. The Taal Volcano has since stayed under an alert level 4.

Resident Ronnie Barrion said they did not have enough time to bring the animals when they evacuated the island on Sunday.

Pig carcasses trapped in bamboo pig pens have begun to rot and stink.

The Inquirer saw a few more cows and one horse alive on the island in Barangay Calauit on Tuesday. 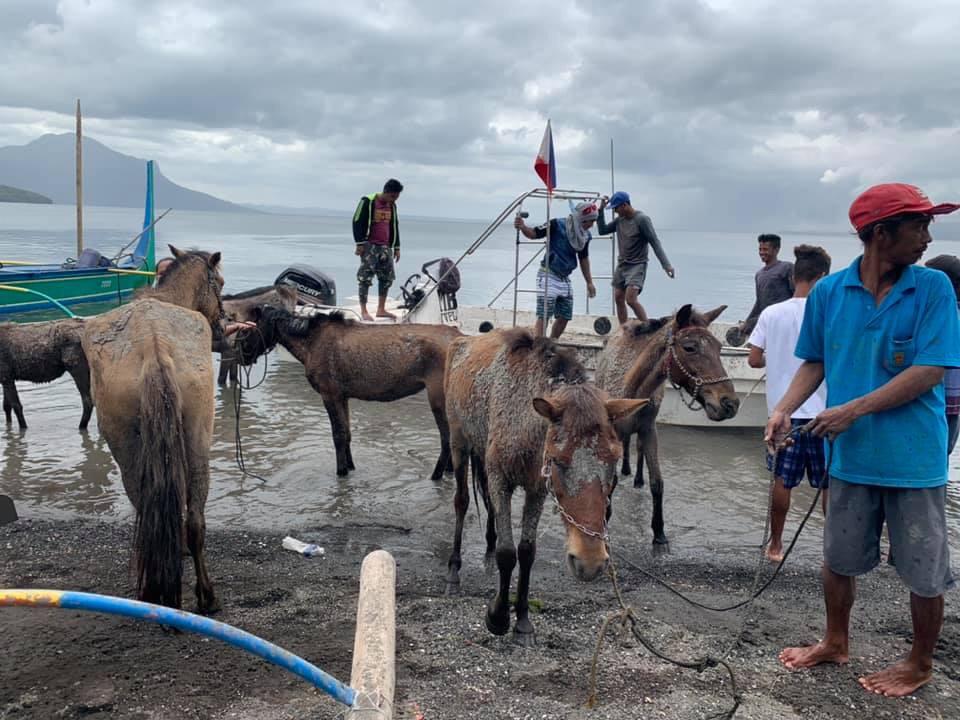 Animal survivors-residents had gone back to the volcano island to rescue horses that survived the thick ash fall in Barangay Calauit, Balete, Batangas on Tuesday. MARICAR CINCO/INQUIRER SOUTHERN LUZON

On the mainland, a boat of residents just rescued four horses off the volcano island. The horses were all covered in mud.

Also Tuesday, a 20-member team from the Metro Manila Development Authority was deployed on a boat to conduct the first government ocular visit on the island.

“We are here to conduct a rescue of the animals and if there were still people, we’d take them too of course,” said the team’s leader Chris Palcis.

Barrion saw one of his pigs still alive but said he would have to leave it there as animals may not be allowed in evacuation centers.

Palcis said the local government of Balete had just designated an area on the mainland for the animal survivors.

“Those animals are the main source of living of the people here,” Palcis said.