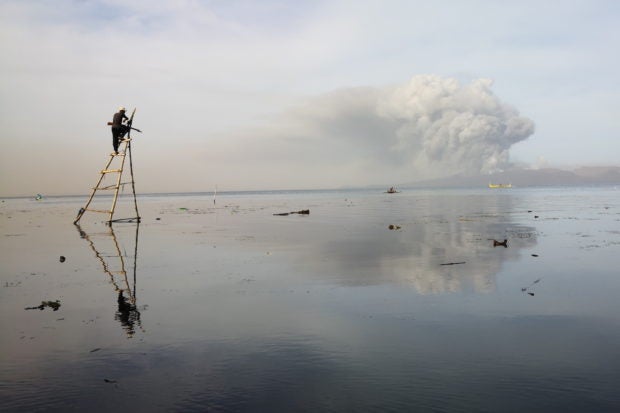 TAAL LAKE LIVELIHOOD A fisherman in Mataas na Kahoy town, Batangas province, uses a perch made of bamboo poles to scan the waters of Taal Lake for tilapia that he will catch using an improvised spear gun. Some residents in lakeshore villages in the town went about their activities on Monday morning despite Taal Volcano’s steam-driven eruption that started on Sunday. —CLIFFORD NUÑEZ

MANILA, Philippines — The Department of Agriculture (DA) has urged farmers and fishermen in Calabarzon (Cavite, Laguna, Batangas, Rizal and Quezon) region to secure their farm animals and harvest marketable crops and fish that may be affected by the expected ha­zardous eruption of Taal Volcano in Batangas province.

Ashfall had been observed in areas outside the region, even reaching parts of Central Luzon, about 200 kilometers away from the volcano, on Sunday and Monday.

The DA also reminded farmers to ensure that their farm equipment were secure before leaving their communities.

The agency has yet to release an estimated value of agricultural damage from the phreatic (steam-driven) eruption of Taal, but Agriculture Assistant Secretary Andrew Villacorta said the DA had already sent personnel to Batangas to assess the situation.

On social media, posts showed some residents in Batangas evacuating their homes with their cows and carabaos in tow, while others showed images of their vegetable farms covered with ash and mud.

Those whose livelihoods were ruined may avail of loans under the DA’s survival and recovery loan program. Under this assistance, farmers may get an emergency loan of P25,000 at zero interest and payable in three years. 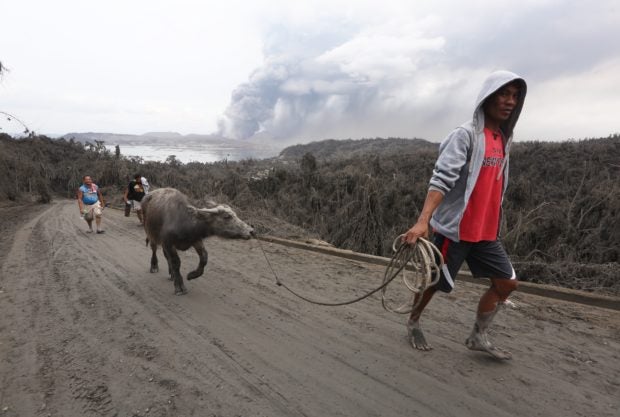 MAN, BEAST AND ASH A farmer in Laurel, Batangas, takes his carabao to safer ground as Taal Volcano spews ash. Below, a coconut plantation in the town has become a landscape of gray following an ashfall. —PHOTOS BY NIÑO JESUS ORBETA AND RICHARD A. REYES 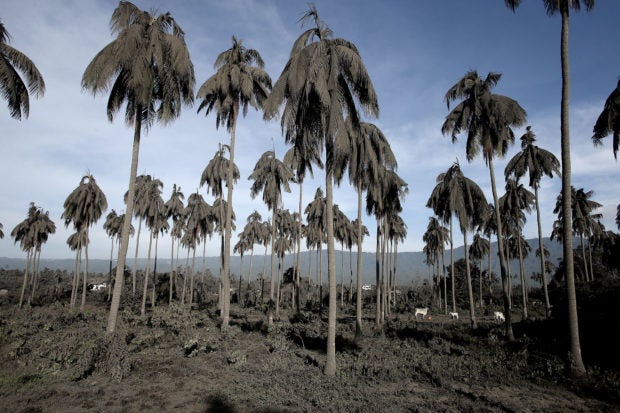 They can also borrow a higher amount under the recently launched Micro and Small Agribusiness Loan Program.

Dar said the DA’s priority was to ensure the safety of farmers, fisherfolk and their families, especially those in rural areas.

“We have sufficient rice stocks in the regions and pro­vinces affected by the ashfall. There are NFA employees [manning] skeletal forces in central and field offices and in warehouses, ready to serve the requirements of [local governments], the DSWD (Department of Social Welfare and Development) and other relief agencies should they need rice for ashfall victims,” NFA Administrator Judy Carol Dansal said.

Provinces in Calabarzon and Mimaropa (Mindoro, Marinduque, Romblon and Palawan) regions have 1.93 million bags of rice in stock.

Currently, the county’s rice reserves in households and in commercial and NFA warehouses are enough for 100 days, the agency said.

Dansal also assured the public that rice being stored by the NFA was safe for consumption, noting these were stored in areas not affec­ted by the ashfall. INQ