Student in custody after shooting at Milwaukee-area school

MILWAUKEE  – An officer shot an armed male student Monday morning in a classroom at a suburban Milwaukee high school after the teenager pointed a gun at officers, a police chief said. 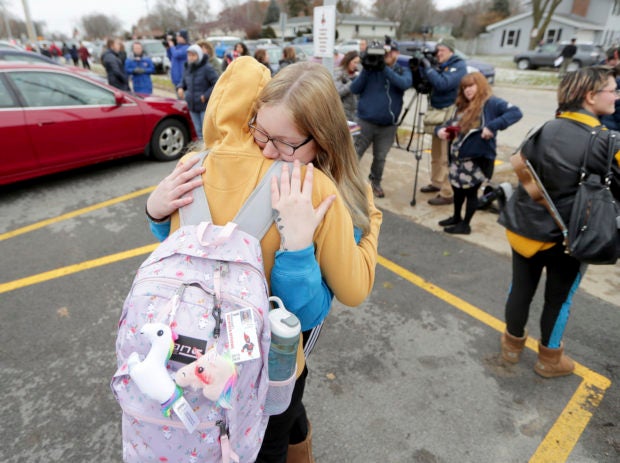 A Waukesha South High School student informed a school resource officer that a classmate had a handgun around 10:17 a.m., Waukesha Police Chief Russell Jack said. He said the resource officer went to the classroom to confront the 17-year-old and move other students in the room to safety. Authorities have not said if other students were in the classroom during the ensuing standoff, and Jack did not immediately respond to an email seeking clarity.

Waukesha police and sheriff’s deputies soon arrived at the school and tried to de-escalate the situation to no avail.

“The suspect would not remove his hands from his pocket and continued to ignore officers’ commands,” Jack said. “The suspect removed his handgun from his waistband and pointed it at the officers. An officer was forced to discharge his firearm, striking the suspect.”

Jack said officers performed life-saving measures on the student, who is in custody and in stable condition. The officer who shot the student is an 11-year-veteran of the Waukesha police department, Jack said. He did not specify whether the officer was also the school resource officer and has not replied to the question via email.

No officers or other students were injured, Jack said. Police have not said whether the student ever fired his weapon. Police said the shooting was an isolated incident and that they are not seeking any other suspects.

Andrew Oresick, 16, told the Journal Sentinel that he was outside his Spanish class hanging posters with other students and their teacher when they heard a commotion.

“These kids start running out from the classroom directly across from us, and one of them goes: ‘He’s got a gun,'” Oresick recalled. He said their Spanish teacher immediately got them into the classroom.

Parents gathered outside and hugged students as they streamed out of the school about 18 miles (30 kilometers) west of Milwaukee. Some students said they took cover under desks and teachers barricaded doors when a drill was announced. They told reporters outside the school that they knew it wasn’t a drill when they heard two or three gunshots.

“It was just really scary,” Alexis Grady, a senior, told the Journal Sentinel.

School shootings have occasionally shone a spotlight on the response by guards and school resource officers. In 2018, a deputy working as a school resource officer at Marjory Stoneman Douglas High School in Parkland, Florida, did not enter the high school while a shooting was in progress; 17 people died and the deputy was charged for his inaction. Two months after that shooting, a deputy in Maryland received a governor’s citation for confronting an attacker at a high school in that state.

In Colorado, a private security guard captured a suspect in a suburban Denver charter school shooting earlier this year, but also found his actions under review because a bullet he fired passed through a wall and hit a female student. It later emerged that the school didn’t know the guard was armed.