By the Inquirer staff 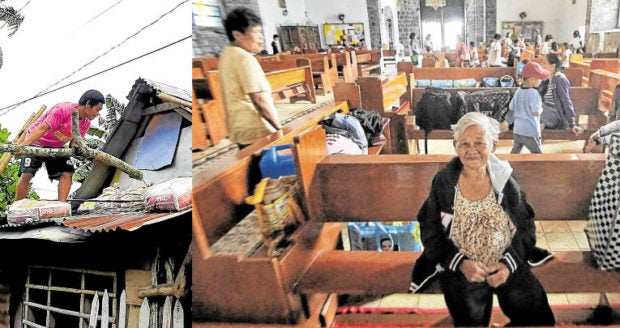 IN TYPHOON’S PATH Aman in Ligao City, Albay province, reinforces the roof of his house (left photo) while residents in Santo Domingo town take shelter in a school as the Bicol region braces itself for Typhoon “Tisoy” on Monday. —MICHAEL B. JAUCIAN AND MARK ALVIC ESPLANA

Tens of thousands of people in the Bicol region hunkered down in evacuation centers as powerful Typhoon Tisoy (international name: Kammuri) made landfall over Sorsogon late Monday night, threatening floods and landslides and disruption of plans for Southeast Asian Games (SEAG) events in and near Manila.

President Rodrigo Duterte placed all disaster-response agencies on alert as the typhoon bore down on Bicol with maximum sustained winds of 175 kph near the center and gusts up to 240 kph.

As of late Monday, Tisoy had slightly intensified, with the southern portion of its eyewall already hitting Northern Samar with intense rain and violent winds, according to the Philippine Atmospheric, Geophysical and Astronomical Services Administration (Pagasa).

The storm was on track to then pass close to Manila, home to some 13 million people and site for many of the SEA Games events.

Interior Secretary Eduardo Año directed all governors, mayors and village chiefs to stay at their posts and oversee response to disaster that the typhoon might cause.

The Philippine National Police placed all of its units in Luzon and the Visayas on full alert for calls for help from disaster responders.

The Metropolitan Manila Development Authority warned more than 500 villages in the 14 local governments in the National Capital Region to take precautionary measures, as Tisoy was expected to bring heavy rain and cause extensive flooding while crossing southern Luzon.

Pagasa weather specialist Aldczar Aurelio said that if there would be no changes in its direction, Tisoy might make several landfalls as it moved westward over islands at 15 km per hour.

As of Monday afternoon, Tropical Cyclone Wind Signal No. 3 was raised in the provinces of Catanduanes, Camarines Sur, Albay, Sorsogon, Camarines Norte, Masbate (including Ticao and Burias Islands and Romblon) and Marinduque.

Frequent to incessant to intense rain was expected in these areas from Monday night to Tuesday morning, Pagasa said.

Tisoy has already snarled plans for the 30th SEA Games, being held at venues in Manila, Clark and Subic.

In La Union province, the windsurfing competition of the SEA Games in San Juan town was canceled on Monday because of the bad weather. Organizers said the competition would be moved to a later date.

The organizers have insisted they have contingency plans in place, including allowing indoor events to proceed but with attendance limited to competitors.

“For example, basketball or volleyball, normally if there are typhoons, which has been done, the competition continues if necessary but without spectators,” Ramon Suzara, the chief operating officer of the organizing committee, said on Sunday.

Other events that were rescheduled late Monday were polo in Calatagan, Batangas, where the 0-2 goals squad was to see action, and the game of skate in skateboarding competition in Tagaytay where Margielyn Didal would have debuted.

This year’s Games are already particularly complex, with a record of 56 sports across dozens of venues that are in some cases hours apart by car.

Around 8,750 athletes and team officials are participating in the Games — the biggest ever — along with another 12,000 volunteers.

Organizers hope 500 million viewers will tune in on TV by the end of the competition on Dec. 11.

The Philippines has made a strong start in the Games, rising to the top of the medal table with more than 70 in total, ahead of Vietnam in second and Thailand in third.

But bad weather forced the cancellation of international and domestic flights to and from Manila on Monday, probably affecting attendance at the venues.

Thousands of people in Bicol fled their homes in coastal villages and mountain slopes as Tisoy roared toward land on Sunday.

By Monday, more than 200,000 people were sheltered in evacuation centers in the provinces of Camarines Sur, Camarines Norte, Catanduanes, Masbate and Albay.

More than 2,000 travelers were stranded at ports in the region, according to the Coast Guard.

“We hope there won’t be any damage, but given its (Tisoy’s) strength, we can’t avoid it,” Mark Timbal, spokesperson for the National Disaster Risk Reduction and Management Council told Agence France-Presse (AFP). “We have preemptively evacuated people in areas that are in the storm’s direct path.”

But some accidents were reported as light to moderate rain began to drench Bicol on Sunday.

At Del Gallego town in Camarines Sur province, a bus traveling from Pio Duran town in Albay province to Manila went over a cliff after its driver lost control of the vehicle at 11:10 p.m. on Sunday.

Del Gallego police reported that two passengers were injured in the accident.

In Tabaco City, Albay, a 13-year-old girl was electrocuted after she accidentally touched a live wire at her home in Santo Cristo village on Monday morning.

Pagasa also warned of rain-induced landslides and possible storm surges of up to 3 meters, which could hit coastal areas in Bicol.

Some local governments in the region banned the sale of liquor to ensure order in responding to Tisoy.

School was called off in Quezon province until Wednesday and some parts of Laguna province up to Tuesday.

In Central Luzon, classes from preschool to high school were suspended on Monday at Cabanatuan City in Nueva Ecija province. Preschool classes were canceled in San Antonio town.