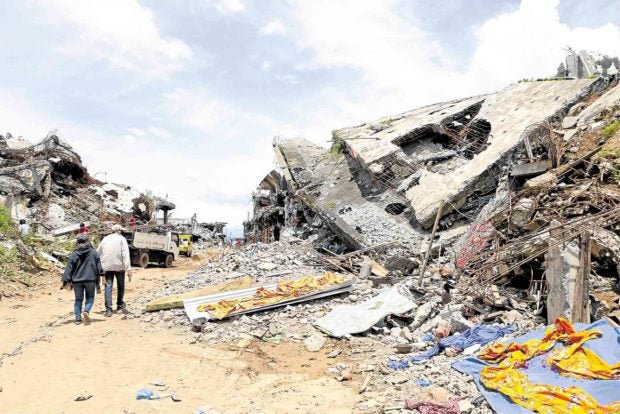 BATTLE-SCARRED In this file photo, houses along Marawi’s lake side were destroyed in the aftermath of the 2017 fighting between government forces and Islamic militants. JEOFFREY MAITEM

CAGAYAN DE ORO CITY, Misamis Oriental, Philippines — The national government’s plan to establish another military camp in Marawi City has stirred a brewing controversy as a number of Maranao leaders are opposing it.

But Housing Secretary Eduardo del Rosario, chair of Task Force Bangon Marawi, the body coordinating efforts in rebuilding the war-ravaged city, has sought to allay fears about the plan.

He told reporters here that what is being planned is only a satellite facility of the Army’s 103rd Brigade so that it will have a forward presence in the city’s eastern portion.

Del Rosario, a former military commander, said the existing Kampo Ranao sits on the western side of Marawi, separated from the main urban center by the Agus River.

By having troops stationed in another facility, the military could tighten its presence, preventing another episode of security breach just like what happened in the past when Islamic State-linked militants freely came and went into the city, he said.

Already, President Duterte has issued, through Executive Secretary Salvador Medialdea, Executive Order No. 41, creating a technical working group (TWG) for the establishment of the military camp in lakeside Kapantaran village.

Among other things, the TWG will assist in the relocation of affected families whose properties will be subject for acquisition.

But the plan does not sit well with several Maranao leaders who saw it as an attempt to further militarize the city.

Aminoden Macalandap, president of the Lanao del Sur chapter of Integrated Bar of the Philippines (IBP), said the government must “prove genuine necessity of taking the [private] properties.”

“ … Two military camps in one city is too much. Instead of healing the wounds of history, increased militarization only reinforces the narrative that the Bangsamoro can only be ruled by an iron hand,” Macalandap said.

Drieza Lininding, chair of the Moro Consensus Group, questioned the noninclusion of a local government representative in the TWG, which is led by the Department of National Defense.

He also questioned the lack of consultation on the plan.

But Del Rosario said: “Based on the clamor of some residents, the camp is not necessary. But from perspective of security, the satellite unit is necessary.”

He said the lessons of the run-up to the Marawi siege showed a need to station military troops on the other side of the city. “How come the drug trade proliferated [before]? How come the Maute group entered into the city?” he asked.

“We aim to prevent the intrusion of lawless elements into Marawi, and stop the selling of drugs [which used to be] in the central business,” he added.

According to Del Rosario, the camp will be a “small facility, enough for a battalion of soldiers.” Along with rebuilding its key infrastructure, the government will also ensure adequate security, he said.

The planned camp was originally designed for 20 hectares but was adjusted to 10 ha. “But we can live with 8 ha,” Del Rosario said.

The facility will encompass the area that hosts the old City Hall and the property of some 10 private claimants, he said.

Kampo Ranao sits in an American-era military reservation spanning some 60 ha, although portions of the land have given way to other uses. It straddles toward the provincial capitol, the City Hall and a state-owned hydropower generating plant.