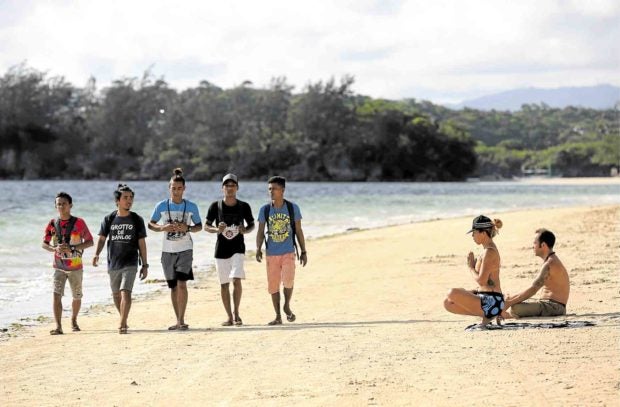 QUIET TIME Residents and visitors enjoy quiet time at the less crowded Bulabog Beach on Boracay Island, which is popular for water activities. The government, however, is not sparing several establishments in this section of Boracay from demolition for encroaching on the 30-meter beach easement. —LYN RILLON

ILOILO CITY—Personnel of a government task force on Thursday demolished structures on Boracay Island, four days before a court hearing on an injunction sought by property owners.

The Boracay Inter-Agency Rehabilitation Management Group (BIARMG) led the demolition of parts of 10 commercial and residential buildings along Bulabog Beach in Barangay Balabag that were purportedly encroaching on the 30-meter beach easement.

The demolition was based on an executive order issued by acting Mayor Frolibar Bautista of Malay town, Aklan, according to Natividad Bernardino, the BIARMG general manager.

“This is a tragedy. My clients are devastated and we do not understand the urgency of the demolition considering that we have a hearing on the case on Nov. 11,” lawyer Salvador Paolo Panelo Jr., the counsel of the property owners, told the Inquirer.

Owners of the 10 residential and commercial structures had filed a civil complaint against the local government of Malay to declare the demolition orders as illegal and null and void.

“We built our houses and buildings with all government permits and clearances. We abide by all laws. But last year, they told us that we built on the easement. This is a failure of government, and not us and the private sector. How can this be right?” Rafael Claudio Zulueta III, the owner of Ventoso Residences, said.

Bernardino said there was no legal impediment for the implementation of the demolition order.

She said the 10 structures were the only ones remaining of the 52 establishments along Bulabog Beach that had not complied with the easement rules.

Judge Ronald Exmundo of the Regional Trial Court Branch 7 in Kalibo, Aklan, issued on Oct. 15 a 20-day temporary restraining order (TRO) directing the local government of Malay to “cease and desist” from implementing the demolition orders.

The TRO was in relation to the civil case filed by the property owners against the local government. It lapsed on Monday and Exmundo set a hearing on Nov. 11 on the petition for the issuance of a preliminary injunction.