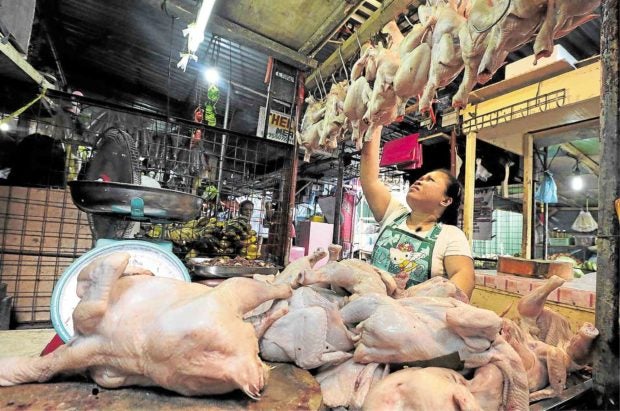 AVOIDING PORKDemand for chicken has risen as consumers avoid pork due to African swine fever cases in several areas in Luzon. In Batangas, a farm prepares to export poultry products as South Korea lifts a ban imposed due to the outbreak of the avian flu. —GRIG MONTEGRANDE

SAN PEDRO CITY—There is enough supply of poultry, as well as pork products, for the coming holiday season, despite an increased demand for chicken due to the pork scare caused by the African swine fever, according to the Department of Agriculture (DA) in Calabarzon (Cavite, Laguna, Batangas, Rizal, Quezon) region.

In Batangas province, a poultry farm was also recently issued accreditation to export its products to South Korea, after a two-year ban due to the outbreak of the H5 avian influenza.

Arnel de Mesa, the DA regional director, said this was a welcome development to the region’s livestock industry, especially to backyard hog raisers affected by the reduced consumption of pork due to the spread of swine fever in several provinces and cities in Luzon, including Metro Manila.

Since the outbreak of the swine fever in August, many hog growers began shifting to poultry raising after the market demand for pork plummeted due to public scare of the animal disease.

South Korea’s Ministry of Food and Drug Safety (MFDS) and the Animal and Plant Quarantine Agency issued the final approval to export to Batangas-based Cariño and Sons Agri-Development Inc. on Oct. 29.

The Philippine Embassy in South Korea, in a statement, said these farms and their facilities had satisfied the “stringent requirements” set by the MFDS and other regulatory agencies based on on-site inspections conducted between Sept. 23 and 30.

Aside from South Korea, Japan and Singapore had also banned poultry products and pet birds from the Philippines due to an outbreak of bird flu in 2017.

According to De Mesa, Calabarzon is the country’s top producer of chickens and eggs, with San Jose town in Batangas accounting for the biggest production.

DA records as of July this year showed the region’s chicken inventory at more than 27 million.