A deceased baby turtle served as a reminder of the deadly effects of pollution after it was found to have eaten 104 pieces of plastic.

“It’s washback season at Gumbo Limbo and weak, tiny turtles are washing up along the coastline needing our help,” the center said in their Facebook post on Wednesday, Oct. 2.

Not such a happy #TurtleTuesday this week. It's washback season at Gumbo Limbo and weak, tiny turtles are washing up…

Whitney Crowder, a sea turtle rehabilitation coordinator at the center, described a washback as a turtle that has been washed back to shore a few weeks after it made its way into the ocean and Gulf Stream, as per Sun Sentinel on Friday, Oct. 4.

The center noted that not all washbacks survive, and that all of the turtles they have found had plastic in their intestinal tracts.

Meanwhile, the center cited that one specific turtle “which would fit in the palm of your hand, had eaten 104 pieces of plastic.”

“This is a sad reminder that we all need to do our part to keep our oceans [plastic-free],” the center stated.

Crowder said in the report that it “was hard to pinpoint the different types of [broken-down] plastics.” However, she did note that they found “a piece of a balloon” and “a wrapper that goes on the outside of bottles” among the 104 pieces ingested by the turtle.

“The plastic plugs them up and causes them to go into septic shock. We perform necropsies on all turtles that die in our care which is how we determine cause of death,” the center explained to one Kelly Barron Schreiner who asked if the turtle had survived. 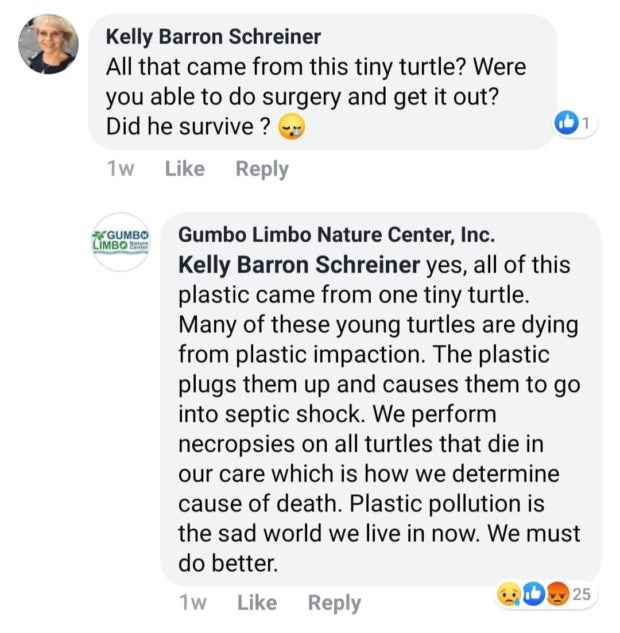 “Plastic pollution is the sad world we live in now,” the center stressed. “We must do better.” Ryan Arcadio/NVG