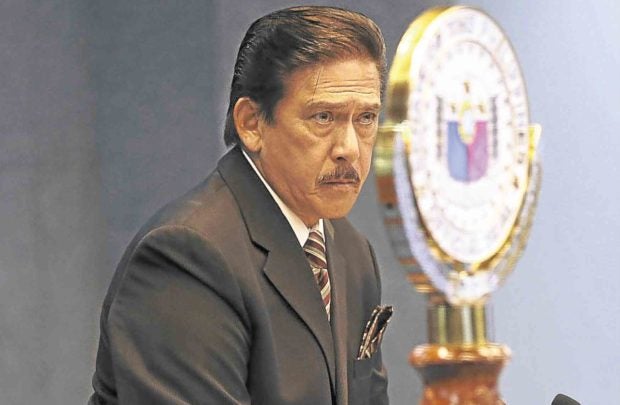 “Ninja cops” is a police term that refers to rogue officers who pilfer and trade illegal drugs seized during antinarcotics operations.

According to Sotto, Albayalde could further prove that he had nothing to do with the ninja cop racket by filing criminal charges against Baloyo and the others who carried out the irregular drug operation in November 2013 in Pampanga province as originally recommended by the Central Luzon police office.

At the time, Albayalde was the head of the Pampanga police office while Baloyo was his chief intelligence officer who led the buy-bust operation in a posh subdivision in Mexico town.

“The best way for [Albayalde] to show that he does not have anything to do with them is to complete the [recommendation] of dismissal and the necessary filing of charges [against Baloyo and the others],” Sotto told a news forum in the Manila Hotel.

“It’s a good sign that we will see if they are indeed removed [from the PNP]… They were only charged with administrative cases when they should [have been] charged [with violation] of Section 27 of (Republic Act No.) 9165,” he added.

Sotto was referring to a provision of the Comprehensive Dangerous Drugs Act of 2002, which he principally sponsored, that imposes life imprisonment on a public official who “misappropriates, misapplies or fails to account for confiscated, seized or surrendered dangerous drugs.”

Sotto said more bombshells would be dropped when the Senate resumes on Wednesday its inquiry into the drug pilferage and irregularities in New Bilibid Prison.

He said he had issued at least nine subpoenas as requested by Sen. Richard Gordon, chair of the justice and human rights committee who opted to hold hearings even during the monthlong recess of Congress.

“I don’t know if I’m at liberty to tell you [now], but there is really something explosive again,” Sotto said.

“I think there will be new evidence and maybe one or two [new] witnesses. [It covers] the entire hullabaloo, from the [good conduct time allowance racket] to the [drug] recycling. These are all connected,” he said.

Asked to elaborate, Sotto said, “The truth would be uncovered.”