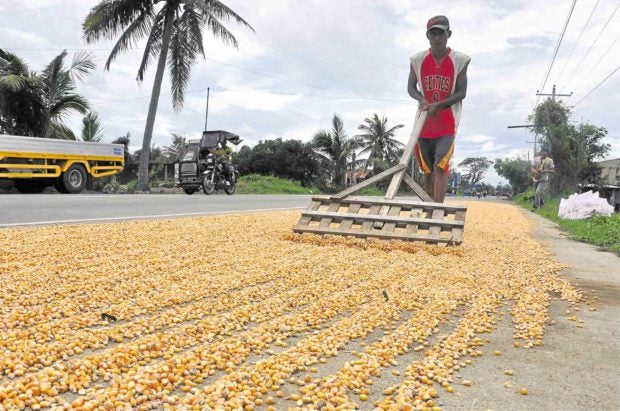 DRIED CORNA farmer dries corn kernels along a road in the City of Ilagan in Isabela. Corn farms in Cagayan Valley region have been attacked in recent months by armyworms, destroying 23 hectares of plantations. —VILLAMOR VISAYA JR.

Fall armyworms have been wreaking havoc on corn farms in Negros Occidental province in the Visayas and Cagayan and Isabela provinces in Cagayan Valley region, prompting local officials to form task forces to prevent the spread of the pests and minimize their damage to crops.

In Negros Occidental, Gov. Eugenio Jose Lacson said the provincial government received reports of presence of armyworms in a corn experiment station of the Bureau of Plant Industry (BPI) at Barangay La Granja in La Carlota City and in La Castellana town.

Fall armyworms (Spodoptera frugiperda), a new species from the United States, is a dangerous transboundary pest that feeds on corn, sorghum, rice, millet, sugarcane, cotton, potatoes and other feed crops.

The armyworms turn into moths and can fly long distances, hatching 200 eggs at a time

Lacson, who chairs the task force formed to address the armyworm problem, said the BPI representatives have been helping Negros Occidental fight the infestation by using pesticides and biocontrol agents.

Provincial agriculturist Japhet Masculino said the armyworms needed to be exterminated because they could wipe out Negros Occidental’s corn industry.

“Once the armyworms turn into moths, they can fly within a 100-kilometer radius and with their prolific egg laying, they could spread fast if not eliminated immediately,” he said.

In Cagayan Valley, armyworms have infested at least 41 hectares of corn farms in Isabela and Cagayan.

Dr. Roberto Busania, technical director for operations and extension services of the Department of Agriculture in Cagayan Valley, said the infestation began in June and worsened between August and September.

Busania said 23 hectares of corn farms had been destroyed in the region, with crop losses reaching P400,000.

Since 2016, armyworms have spread rapidly to the subregions of Africa, causing significant damage to crops. These also spread across Asia since their detection in southern India. Fields in Bangladesh, China, Myanmar, Vietnam, Sri Lanka, Taiwan, Indonesia and Thailand have been ravaged by armyworms, reports showed.