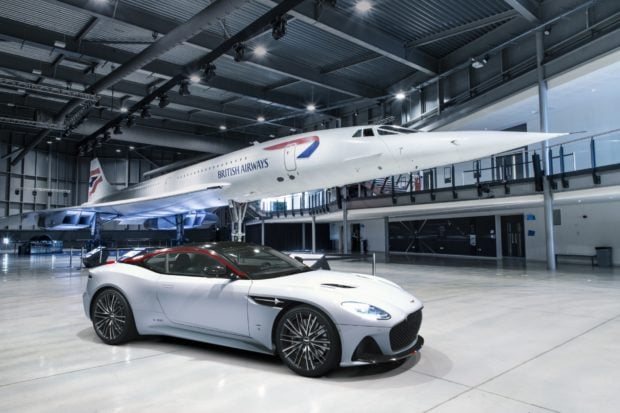 Only ten copies of the Aston Martin DBS Superleggera Concorde Special Edition will be created. Image: courtesy of Aston Martin via AFP Relaxnews

The Aston Martin Wings Series includes all of the brand’s limited edition models. And this week it was extended to include the DBS Superleggera Concorde Edition, which is mainly distinguished by special bodywork elements in carbon fiber and aluminum, and a bespoke painted livery with the British Airways colors on the roof.

Great care has also been taken with the interior of the vehicle, which offers multiple allusions to the supersonic passenger jet, including steering-wheel paddle shifters made from titanium taken from Concorde compressor blades.

As for the other details, the model is fitted with the range’s standard but enormous 725 horsepower DBS Superleggera V12 engine, which is mated to an 8-speed automatic transmission.

With all of this power under the hood, the Superleggera Concorde can reach a top speed of 340 kph and accelerate from 0 to 100 kph in just 3.4 seconds.

The new model is presented in a special edition which will be limited to only ten copies.

This is not the first time that Aston Martin lance has launched a special edition based on its new DBS Superleggera. Earlier in 2019, Aston Martin celebrated the 50th anniversary of the film “On Her Majesty’s Secret Service” with a special James Bond edition of its sports grand tourer. IB/JB