Why you should be reading ‘Tarantadong Kalbo’

“Tarantadong Kalbo” is both an extremely accurate and extremely deceptive description for Kevin Eric Raymundo’s cartoon strip. On one hand, it features a protagonist who is bald, a bit of a wiseacre and is drawn in a simple, somewhat silly style that makes you expect that it’s just nonsensical humor.

But then it gets pretty dark, heartbreaking and tender. There’s religion. There’s profanity. There’s social commentary above all else. All this makes it the best strip to emerge from the pandemic-era Philippine web—and now in a print collection.

“I am very meticulous when it comes to the overall ‘look’ of ‘Tarantadong Kalbo,’” the 35-year-old Raymundo said. “Every panel, every stroke, line, word, down to the color choice. All of it is carefully chosen to evoke a certain nostalgic feeling. This, contrasted with the gravity of the subject matter, makes it all the more impactful. Like a cute rug was being pulled from under you.”

A freelance animator, Raymundo fell in love with drawing as early as age 5. Where did his cartoon persona come from? “‘Tarantado’ is what my friends call me whenever they see my drawings,” he readily admits. “It could be an expression of disbelief like ‘wow, I can’t believe you just drew that,” maybe because the drawing is really good or really offensive. I take it as a compliment either way. And of course I included ‘Kalbo’ because I’m actually bald. Well, not bald ‘bald.’ Technically I’m ‘semi-kalbo,’ I have my own clipper so It’s more convenient for me. I don’t want to have to think about my hairstyle that much because it always takes time away from doing my art, that’s why I decided to just shave it off regularly. You could say that I am kalbo by choice. ‘Tarantadong Kalbo’ has a nice ring to it, too. It rolls off the tongue nicely. Malutong siya, just like a good cuss word.” 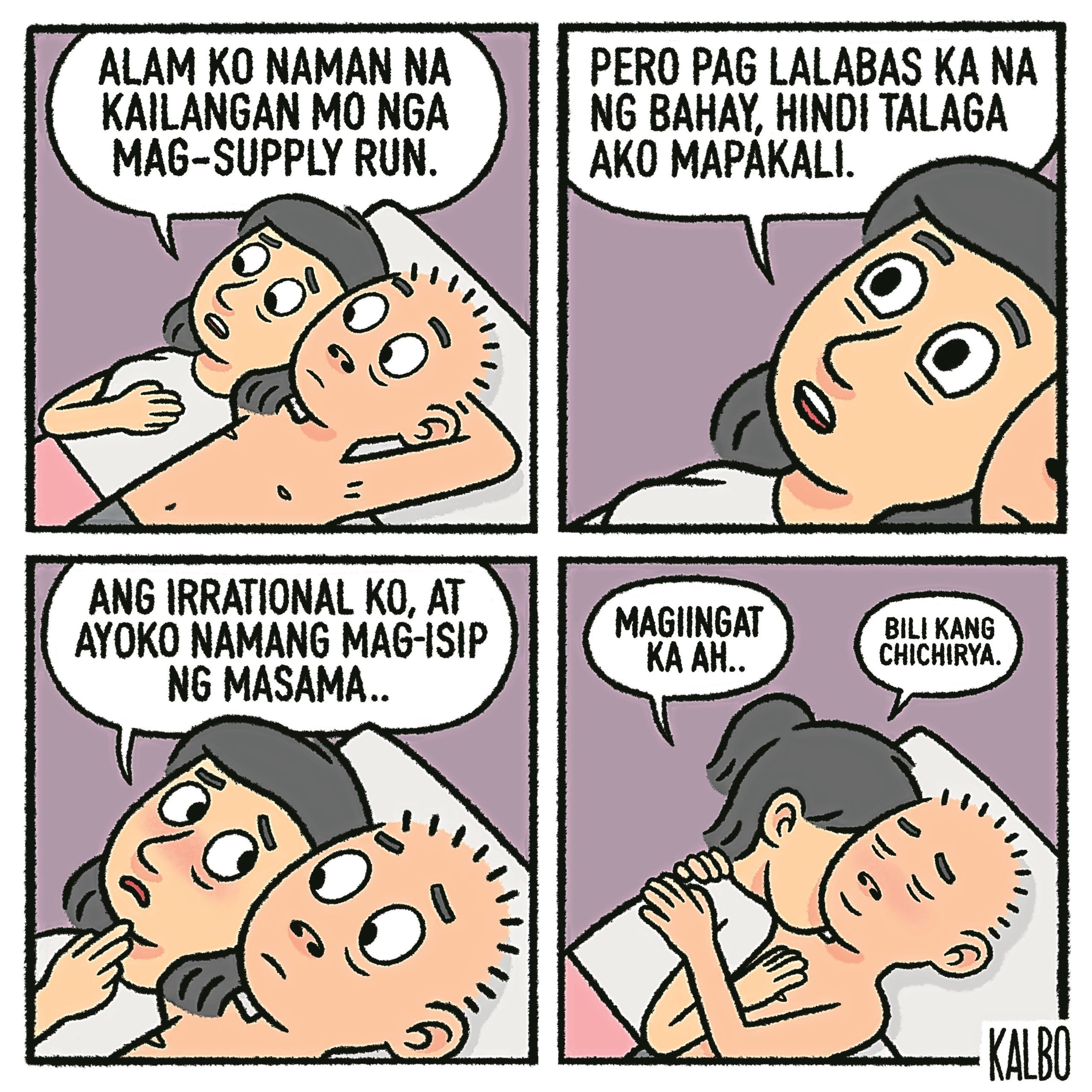 Moved by the universe

Raymundo began his signature work by posting “Tarantadong Kalbo” online: “I started posting my comics on Facebook first, then branched out to Twitter and Instagram later on. At first I was doing it just for fun, and also as an excuse for my wife to buy me an iPad. (Laughs) I really enjoy doing komiks and sharing it with other people that I’m basically giving it away for free online. I had plans of getting my works published, but at the time I was so busy with work. So when Komiket approached me to publish it, I didn’t hesitate anymore. I thought to myself, this is the universe moving for you, just do it.”

Komiket, Inc., is the entity led by Paolo Herras which holds the independent all-Filipino Komiket conventions. It now runs the SecretHQ store venue in Poblacion, Makati, and has started publishing as well. “‘Tarantadong Kalbo Vol. 1’ is one of Komiket’s first published books,” he says. “It was a nerve-wracking experience! It is not as simple as dumping the strips in the collection and calling it a day. First, they’re too many to fit! We had to carefully curate it so that by the end of the book, you get that catharsis. We were under time pressure because we had to deliver it to the printer before the holidays. I’m happy with how the book turned out, so it was all worth it.”

The book, “Tarantadong Kalbo Vol. 1,” has a narrative running through it that is almost exclusively based on life during the quarantine in 2020. “The strips included in the collection were mostly recent ones,” Raymundo explains. “I needed the book to have a central narrative, that’s why most of the material in it was about the quarantine. ‘Tarantadong Kalbo’ started as just a collection of absurd jokes. If you go to the earlier strips on my page, they’re all rendered in black and white. The topics that I chose then were very random. It is basically a slice-of-life style comic, it’s just that it slices deeper now.” The back cover blurb calls 2020, “ang pinakamasagwang taon,” and Raymundo stands by that: “2020 was really something. It felt like a whole decade was squeezed into it. To say that a lot of bad things happened is an understatement. In the future, when someone picks up my book, I want them to relieve that exasperating feeling.”

One of the most surprising aspects of “Tarantadong Kalbo” is the ferocity with which Raymundo makes his political views felt, something, as previously mentioned, makes in impression because of how dissonant it feels with the friendly art: “I’ve been dropping hints in the beginning about my political views. I wanted my readers to be aware of my views from the get go so that there wouldn’t be a painful ‘break-up’ later on. It came to a head at the start of the lockdown. That’s when I started to think, I have to say something about what is happening, this ain’t right. I prepared myself for the backlash, the trolls, losing followers and friends as well. I think it is important for comic creators to realize that comics have always been political. That even their ‘inaction’ to important issues is in itself a political stand—in favor of the oppressor.”

In addition, the protagonist of “Tarantadong Kalbo” is no less than the true Tarantadong Kalbo himself—Raymundo and often his real-life wife Dara: “Yeah, that’s my wife. You can say that It is autobiographical. I draw my comic strips the way someone writes in a journal. Whether it’s a childhood memory, an annoying encounter or a bad headline. I always anchor my narrative to how I experience it.” 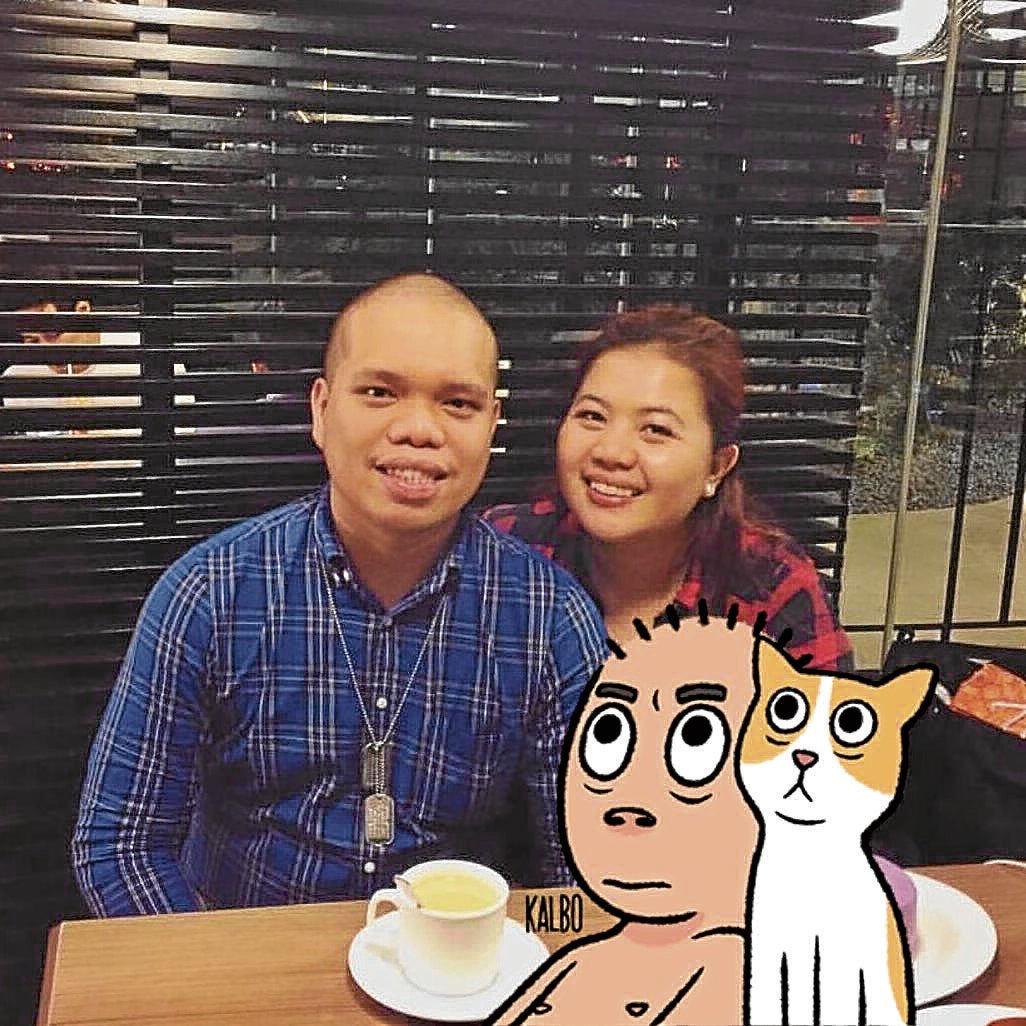 As it jumped from one timeline to another, got liked, was followed and now can be delivered to your bookshelf, “Tarantadong Kalbo” may be on its way to becoming an iconic komiks work. People are buying stickers of his face! “Wow, an icon? really? I am grateful for the positive reception. I had this conversation with my wife, social media is very fickle-minded, you can be the crowd favorite for now, but one wrong move and they drop you like a hot potato.”

There’s also been blowback, of course, that comes with such strong views no matter how cutely presented. “Oh yes,” he says. “A lot. It got pretty bad at one point. Someone posted a photo of me and my wife, calling us, ‘baboyito & baboyita,’ calling us members of the NPA and wishing that we both die. It’s that bad. I’ve been receiving threats almost daily. All in a day’s work I guess. I’ve conditioned myself to not take it seriously, which has worked for the most part. But I still think about how fucked up our current situation is. The scariest thing about getting threats is getting used to it.”

“The book is going to be a yearly thing. I am looking into turning ‘Tarantadong Kalbo’ into an animated series, but not too soon. I’m also planning to do my own animated feature as well. I hope that I do get the time and energy to do all of these. I’m cooking something up, but I’m keeping it a secret for now.”

The breakout online komiks of 2020, “Tarantadong Kalbo” begat “Tarantadong Kalbo Vol.1,” one of the best books, period, of the year. Raymundo has had some wonderful feedback from people who acquired the book: “One reader bought a copy as a gift for her husband on their anniversary. He cried as soon as he saw it. Another one plans to give it to their child when he grows up. I get a lot of messages saying that ‘Tarantadong Kalbo’ helped them deal with the anxiety brought upon by everything that is happening. I guess the best part of it is when people say that my work has been impactful in their lives. It gave them a reason to soldier on in spite of the hardships.”

Amid the humor, amid the honesty and the hot property “Tarantadong Kalbo” has become, Kevin Eric Raymundo wants readers to know one very important thing when they approach the strip: “This may sound a bit harsh, but I want them to realize that our country is in deep shit right now. Behind every comic strip is a question: What are they going to do about it?”