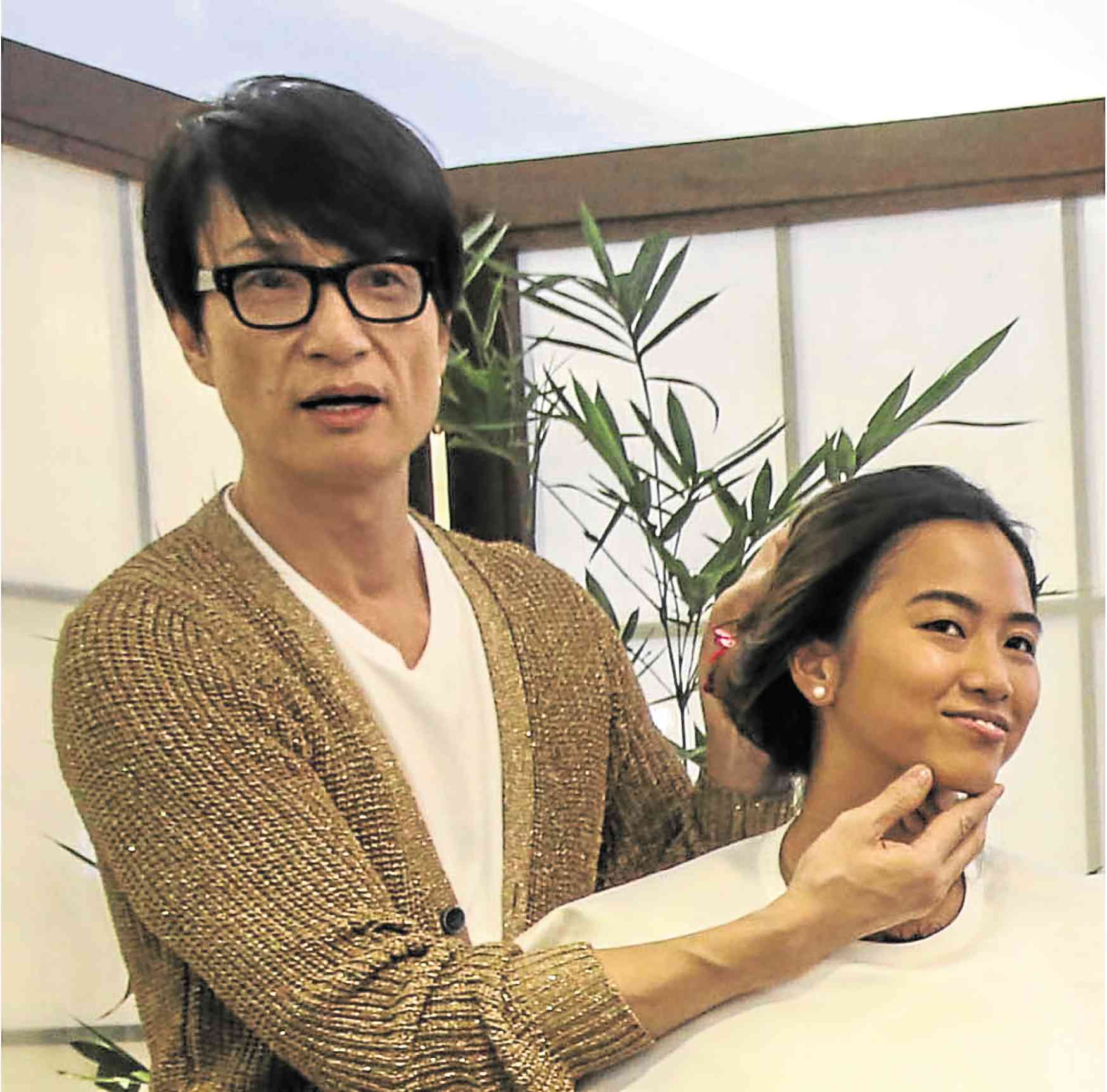 Morimitsu Miyamoto performs a demo on how to use the products of Koh Gen Doh, and how they work on the skin.

Four years ago, Paris-based Japanese makeup artist Morimitsu Miyamoto was in Hollywood when he got a call from a representative of Chinese actress Zhang Ziyi. Famous for her roles in “Crouching Tiger, Hidden Dragon,” and “Memoirs of a Geisha,” Zhang was going to Hollywood to promote her epic film, “The Crossing,” directed by John Woo.

Zhang had just arrived from a promotion trip in Korea. When Miyamoto asked how she was, the actress pointed at the zits under her chin.

“I had another brand in mind, but when she showed me her pimples, I thought only of Koh Gen Do,” recalled Miyamoto.

The Japanese skin care and makeup brand has been popular among makeup artists, especially those with celebrity clients. The foundation is good for high-definition lenses and are said to have treatment benefits.

After applying the Maifanshi Moisture Foundation on Zhang for three consecutive days, the actress showed him the effect: Her pimples had vanished.

Miyamoto returned to Paris while Zhang went to Japan to promote her movie. One day, he got another call from Zhang’s rep who reported that the actress had bought 40 tubes of the moisture foundation.

The foundation was just one of the most popular products of Koh Gen Do, which is sold at Rustan’s Department Store.

The brand claims its products have light-diffusing materials that obscure the pores and flaws, as well as botanical extracts to nourish the skin.

Nicole Kidman raved over the brand on social media when she did “Big Little Lies.” Sarah Jessica Parker used the Maifanshi Aqua Foundation, a lighter version, for her TV series, “Divorce.”

The foundation was also used by Julianne Moore in “Still Alice” and Rachel McAdams in “The Notebook.”

The skin care and cosmetic brand was established in Tokyo in 1986. One of its first hit products is the Spa Cleansing Water, which derives its ingredients from hot spring waters filled with minerals. It also has rosemary, sage and ginger. 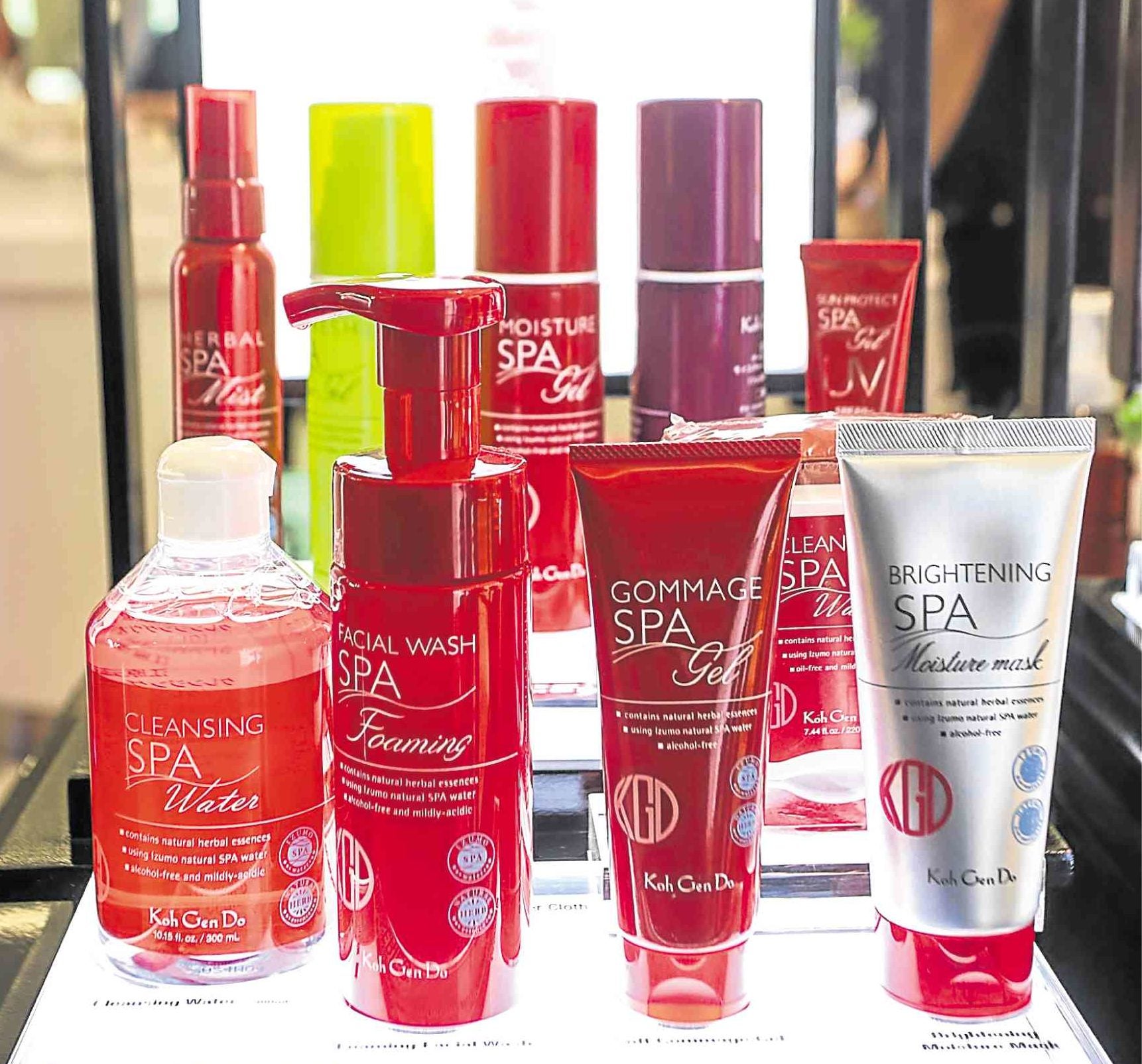 The cleansing water is a gentle makeup remover. Miyamoto advised that instead of rubbing the skin with cleanser, just leave the wet cotton on the eyes and face for two minutes. The makeup is removed and the face feels refreshed.

“I use the spa water and the cleansing milk, especially if there is no time for a massage,” said Miyamoto. “I take the cleansing milk everywhere. When people have wrinkles and look tired, they feel as if they’ve had a lift.”

The Micro Vintage Royal Royal Massage Milk contains fermented pear juice and probiotic ingredients that make the skin glow. The beta-glucan, a fiber, generates skin repair. When the milk is massaged on the face in circular strokes, the skin appears taut and the jawline looks firmer.

An entire range called Oriental Plants, with 36 botanical ingredients, is popular for improving skin elasticity. The fermented ingredients make it ideal for Filipinos who tend to have a combination of oily and dry skin.

Miyamoto said the trend is natural-looking skin. Heavy foundation is considered vulgar. “If your foundation is perfect, 80 percent of your makeup is done,” he said.

Miyamoto learned about Koh Gen Do from a female photographer in Paris who sweated a lot. The moisture foundation is not only water-repellent and long-wearing.

“Other companies have nice colors and formulation but Koh Gen Do foundation protects the skin,” he said. “If models and actresses get a skin problem with my makeup, they won’t call me up again.”

In shoots, photographers note the smoothness of the models’ skin treated with the Maifanshi Gloss Film Foundation. The foundation contains soft-focus pigments, hydrolyzed silk, and collagen for antiaging benefits.

While other women remove their makeup after a photo shoot, models wearing the Koh Gen Do foundation prefer to keep the cosmetics on. “It makes the skin dewy,” said Miyamoto. “The models say the foundation is like a soothing mask.”

There’s a technique to applying the foundation: Start with circular strokes in the face and always apply from the jawline upward to the cheekbone to give the face a lifting effect.

Miyamoto also uses the Maifashi Aqua Foundation Illuminator Oil to enhance the cleavage. He once applied it on the legs of supermodel Naomi Campbell to make them look longer. It consists of jojoba oil, olive squalene, and shea butter that adds shimmer to the skin while moisturizing it.

“In the summer when women want to show off their legs, they should put the oil on the center of their legs to make them look straight,” he said.

“When women wear low-cut clothes, the Illuminator makes the skin look dewy,” said Miyamoto. “It doesn’t matter if they are flat-chested or buxom. People will say, ‘Wow! I would love to touch your body.’ Give them that soft, shiny and clear skin.” —CONTRIBUTOR