Impy Pilapil listens to the stones 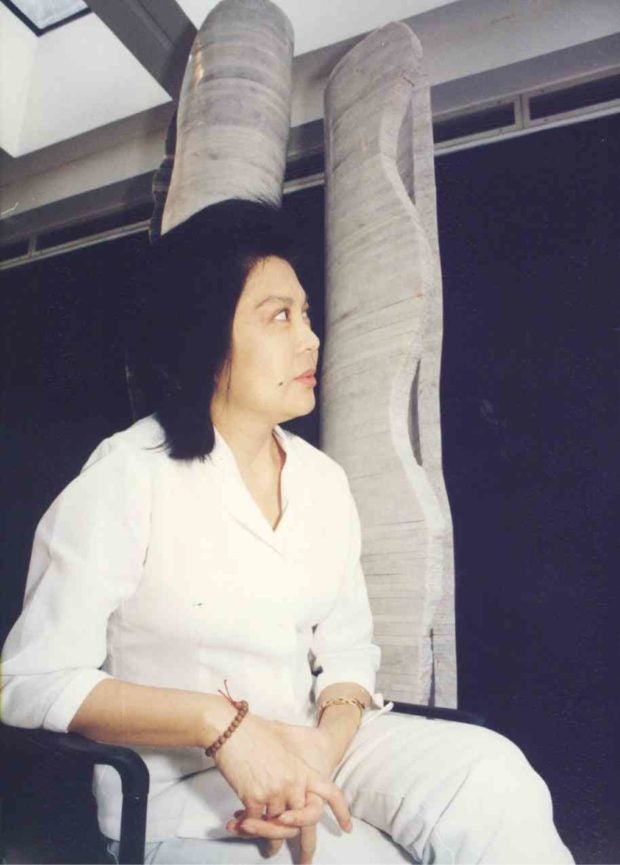 Her art is a process of continuous exploration, says Pilapil

The idea that stones can speak is an ancient one.

Standing stones held magical meaning for the druids or the learned class among the Celts in Europe. To this day, certain people believe they hold encoded ancient knowledge from the elder seers.

Jesus himself said the very stones would cry out if his disciples were stopped from singing His praises. 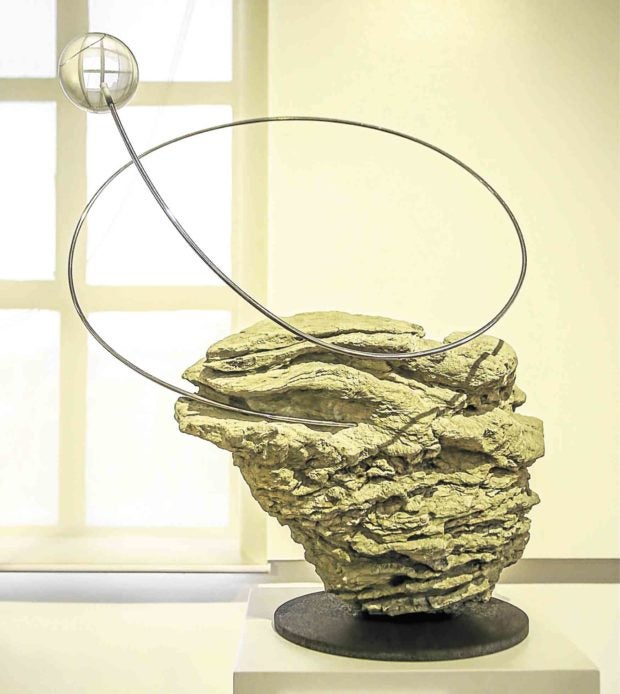 As evidenced in the large pieces that make up “Circa,” Impy Pilapil’s ongoing exhibit at the National Museum for Fine Arts, the sculptor herself believes she hears what the stones are saying.

Although she works in a variety of mediums—glass, steel and armor wood—Pilapil has a special affinity to stone, specially the Romblon marble she favors.

The artist doesn’t use blocks carved out of a quarry. Rather, she seeks out unique pieces that have been weathered by time and the elements. She then transports them to her workshop, where they could remain for years, until they tell her what they want to become.

“I’m attracted by certain shapes and indentations,” she says.

“Some stones have been with me for 15, 20 years. I see them every day. There’s that constant ‘Kumusta ka na?’ It took a long time before they became like that, and it’s not overnight that you can think of what to do with them.” 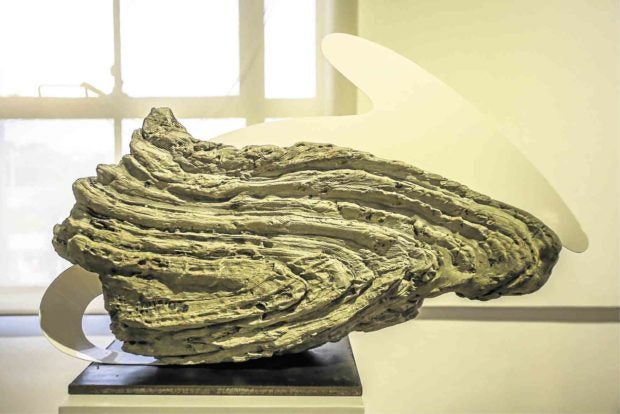 It’s a process, she says of waiting for the time she can connect with the material, or the material connects with her.

“Maybe I’m old-fashioned,” she says. “But I feel if you’re an artist you should be directly connected with your material. Speaking for myself, I feel it’s the true approach to art.”

Of one of the pieces in “Circa” from the “Earth Cycles” series, for instance, she writes:

“Stone as a medium compels both the artist and the viewer to invoke a primordial sense of curiosity. Whether we look upon a smooth stone or one that is weathered by nature, we are looking at the evolution of the Earth. I hold on to that idea fully knowing that the final sculptures are but one stage in a multilayered process involving logistics and composition— notwithstanding how nature has shaped this material with incomparable detail over eons.”

“Normally, I follow the shape of the stone,” says the artist. “I don’t reshape it, and I leave the rest of it raw.”

She speaks of tuning in to the life force of the stone, and allowing it to reach its fullest expression in the resulting sculpture.

“I never really thought of creating form prior to finding stone,” she writes of another piece from the “Earth Empowered” series.

“Instead, I created according to how the stone would speak to me. Every piece of stone conveys its character and integrity. If one listens, it opens up worlds of what one can do with it.” 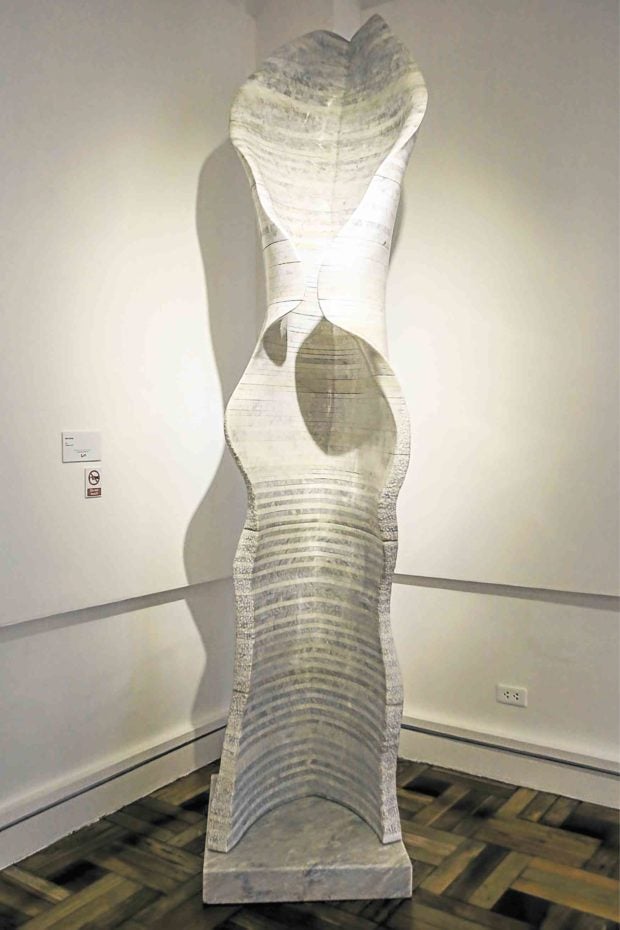 Her art is a process of continuous exploration, says Pilapil: “My own personal growth is part of that, because as you grow older, hopefully you also gain wisdom.”

Anthroposophy, the spiritual path developed by Austrian philosopher Rudolf Steiner (died 1925), is a key influence. Pilapil has been a keen student of Steiner’s ideas since 1998.

A kind of Western European analogue to yoga, Steiner basically outlined a path toward reaching full human potential in the individual and society.
He is best known for developing alternative educational ideas embodied in the Waldorf schools; an organic farming method known as biodynamic agriculture; alternative medicine; and unique theories on art and the natural sciences.

Under Steiner’s system, says Pilapil, “people are trained to be whole, good human beings. What more do you need from a person?”

Pilapil came to sculpture through a circuitous route. In the late 1960s, she enrolled at the University of the Philippines College of Fine Arts, but left after only one year to study stage design in Rome under a scholarship program offered by the Italian government.

Her idea was to work for the newly opened Cultural Center of the Philippines, but upon returning, she discovered that the CCP Main Theater was still a few years away from completion. Pilapil found herself writing copy for the Malacañang Press Office and running a tailoring shop, among other things, to survive while doing art projects.

She then went to New York’s Pratt Institute to study lithography. Upon returning to Manila, she joined the Printmakers’ Association of the Philippines, a kind of cooperative where BenCab, Pandy Aviado, Manuel Rodriguez and other artists shared facilities for making graphic art.

“I did serigraphs, lithographs,” she recalls. “I found it exciting, I could explore colors and play around with shapes.”

The process, however, was tedious and time-consuming, and Pilapil craved a more direct involvement in the material, which sculpture offered. She started with paper sculptures, then moved on to glass, steel, stone and wood, eventually building an evolving body of work.

“Impy has discovered the philosophy of the world that exists within and around us and she has embraced this wholeheartedly,” wrote Galleria Duemila’s Silvana Ancellotti-Diaz.

“The sense of the universe has bolstered her creative energy, giving birth to works that are powerful, feminine, sensual and peaceful. She is my version of a true Bodhisattva—an artist of great compassion and wisdom—who allows the spectator to experience this beauty through her interactive and synergistic works.” 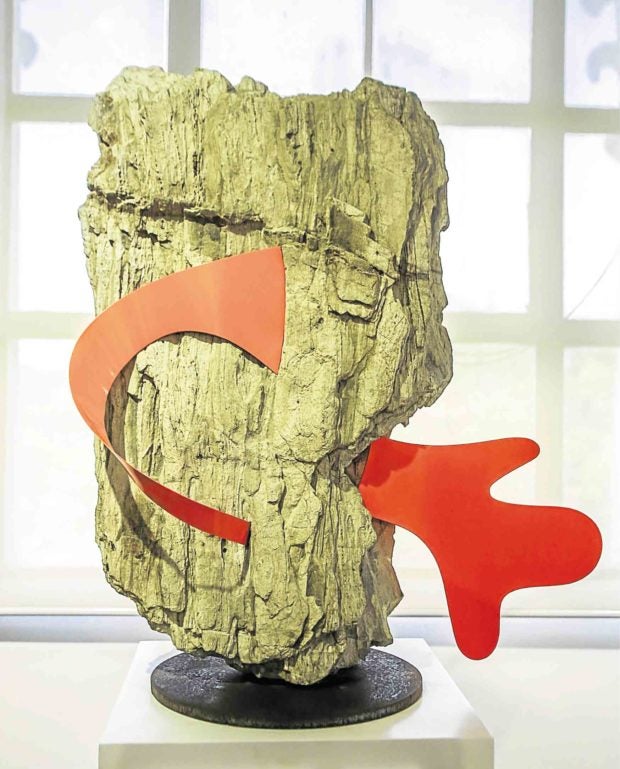 “I’ve made it a rule that I will not show something I don’t believe is fresh and new,” says Pilapil. “That’s very important to me. I have so many things to explore. My sketchbooks are full. I have so many ideas that sometimes I don’t remember what they are.”

As she writes in her statement for “Circa”:

“I don’t believe that I will ever stop creating. The collection on display today isn’t a chronicle but rather a path to the future.”—CONTRIBUTED

“Circa” is on exhibit at the National Museum of Fine Arts until end of September.