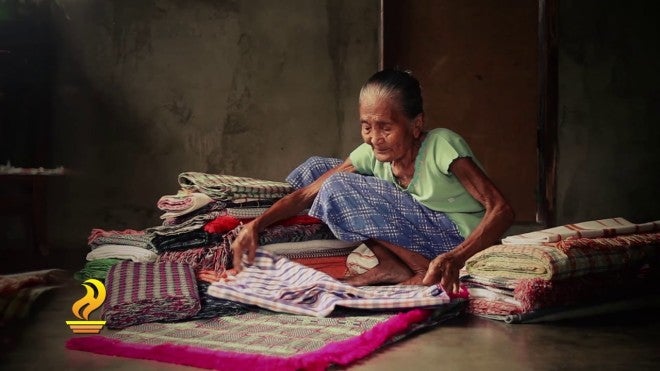 Now in her 90s, she has inspired her neighbors in Lumbaan-Bicbica, a poor barangay in Pinili, Ilocos Norte, to take interest in traditional loom-weaving, to plant cotton, and to work with her and their benefactors to create avenues for livelihood and a better, more prosperous and healthy community.

Less than a decade ago, a good friend asked me to check how inabel weaving was in this corner of Pinili, in preparation for the planned visit of a designer who was looking for material.

I went, and sadly had to report that there was little by way of production in this town close to the border with Nueva Era town.

Meanwhile, Dr. Norma Respicio of the University of the Philippines was then quietly working to have Nana Magdalena recognized for her innovations in inabel textile.

The recognition came—the GAMABA award in 2012, which initially restored some interest in the weaver and her craft. Part of the award included modest funds for the establishment and maintenance of a school of living traditions to enable her to teach her knowledge of the craft to interested parties.

Dr. Joven Cuanang, a province mate and benefactor, thought that locally grown cotton would best complement the traditional weaving of Pinili. He convinced a number of local farmers to grow cotton by providing the seeds and the water pumps required for irrigating the cotton fields, as well as promising to purchase the harvested crops.

In 2016, the yield was a thousand kilos (1 metric ton), which he promptly purchased for ginning, spinning and conversion to threads suitable for weaving.

From the initial three remaining weavers some years back, there are now 15 active weavers, with a number of teenagers also learning the craft keenly.

From the two hectares of land planted to cotton in 2016, this year, there are now 15 farmers planting 22 hectares to the crop. With pledges of support from interested parties, these numbers are expected to  improve dramatically.

Cuanang’s friends, observing the results of cotton growing and renewed interest in inabel weaving, offered their unoccupied Pinili ancestral home to house a showcase of Nana Magdalena’s weaving. The home was repaired and refurbished, and opened in late December 2016.

Inabel 2017, a fashion show of designs by Edgar Madamba and Nina Corpuz (children’s clothes) will be held at Sitio Remedios in Currimao, on April 15.

“When I hold fashion shows in Hawaii and the US West Coast, Ilocanos appreciate clothes made from our native fabrics. Vintage skirts (kaing in Ilocano) that I update into modern outfits are immediately sold out. Nana Magdalena’s example will surely result in a renaissance of her original designs,” he said.

Nina, born and raised in Batac, says: “My two girls, Stella and Emily, are my inspiration. I love dressing them up in the cutest, coolest outfits as any mother would. However, I also want to instill in them, at an early age, the value of their Filipino and Ilocano heritage. Wearing inabel is like wearing a work of art—they are exposed to this beautiful fabric and become promoters of Filipino craftsmanship.”

Some of the best fashion professionals are contributing their time and expertise: Cata Figueroa as director, and Jingky Ilusorio as make up artist.
The group hopes to see the participation of fashion experts who are active in Ilocos Norte.

The proceeds of the benefit show will help purchase a ginning-spinning machine to speed up the production of thread from the raw cotton. The machine costs P7 million.

Meanwhile, the traditional way of production of thread will be patiently relearned, through the memory of Nana Magdalena, the repository of wisdom of this noble weaving tradition of the Ilocanos.