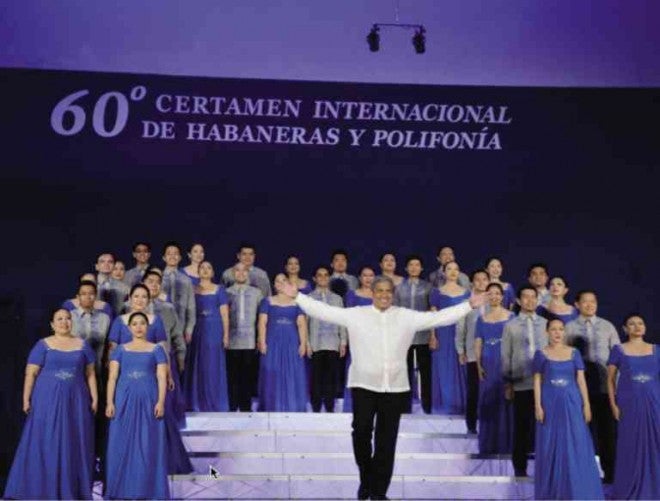 Days before, ACS had bagged a gold medal and was declared champion of the 8th World Choir Games in Riga, Latvia.

For Jonathan Velasco, conductor and music director of ACS, winning the gold medal in Latvia is a dream come true. Velasco, who has been an adjudicator of Riga’s World Choir Games since 2001, said it was his wish to bring ACS to this competition in view of the excellent acoustics of the churches serving for the Sacred Music category.

“We prayed as we sang, bringing out the meditative import of the song,” said Velasco.

When announcement of the winners came, the singers were euphoric. They rushed to the stage and beamed with patriotic pride as the Philippine flag was raised and the National Anthem played.

In the Chamber category, ACS was a close second to the choir from Venezuela that placed first. Out of several choirs all over the world that had sent their application, ACS was among only 12 choirs to compete in the two categories: Habaneras and the Polyphony. 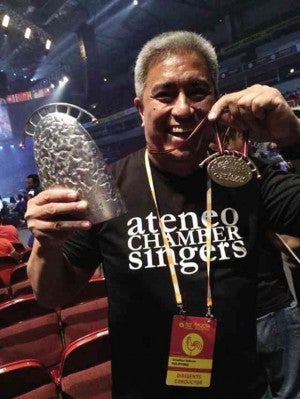 The habanera is a music genre that originated from Havana, Cuba, and is a means by which the people of Torrevieja proudly communicate their history and culture. It was brought by the Spaniards to Europe and has become a very popular form for lilting love songs.

The competition was covered on Spain’s television.

ACS went on to the last leg of its Paghayo Competition Tour; capped its tour by singing in Cova de Sant Ignasi, Montserrat, on July 31, feast of St. Ignatius, founder of the Society of Jesus.

The choir gave the world premiere of a piece based on St. Ignatius’ Prayer for Generosity titled “Señor,” written especially for this occasion by Gianpaolo Eleria, one of the group’s resident composers.

The choir was founded in 2001, and is composed of 33 choristers most of whom are graduates of Ateneo de Manila University.

It is gratifying to lead this choir, said conductor Velasco, considering that Ateneo does not have a music school. He said one could count by the fingers of one’s hand members who were musicians.

The last time ACS competed was in 2006, when it bagged a gold in Tolosa, Spain.

Its tour this year was made possible through the help of the Ateneo; Jesuit Communication; San Miguel Corporation; Philippine Amusements and Gaming Corporation; National Commission for Culture and the Arts; Department of Tourism; and Tourism Promotions Board.