The eighteen-year-old pop singer-songwriter will be performing in select Megaworld Lifestyle Malls, from January 17 to 18, 2020 with the following schedule:

“This will be my first time in the Philippines,” the teen heartthrob reveals in an interview. “I’m so excited to experience the culture and see as much as I can while there. I can’t wait to eat the amazing food and hopefully see some of the beaches as well.”

With Nathan Huang of Nathan & Mercury and featuring Any Name’s Okay as opening act, the American recording artist will perform some fan favorites, including the mid-tempo jam “All My Friends” and the global smash “Slow Dance.” 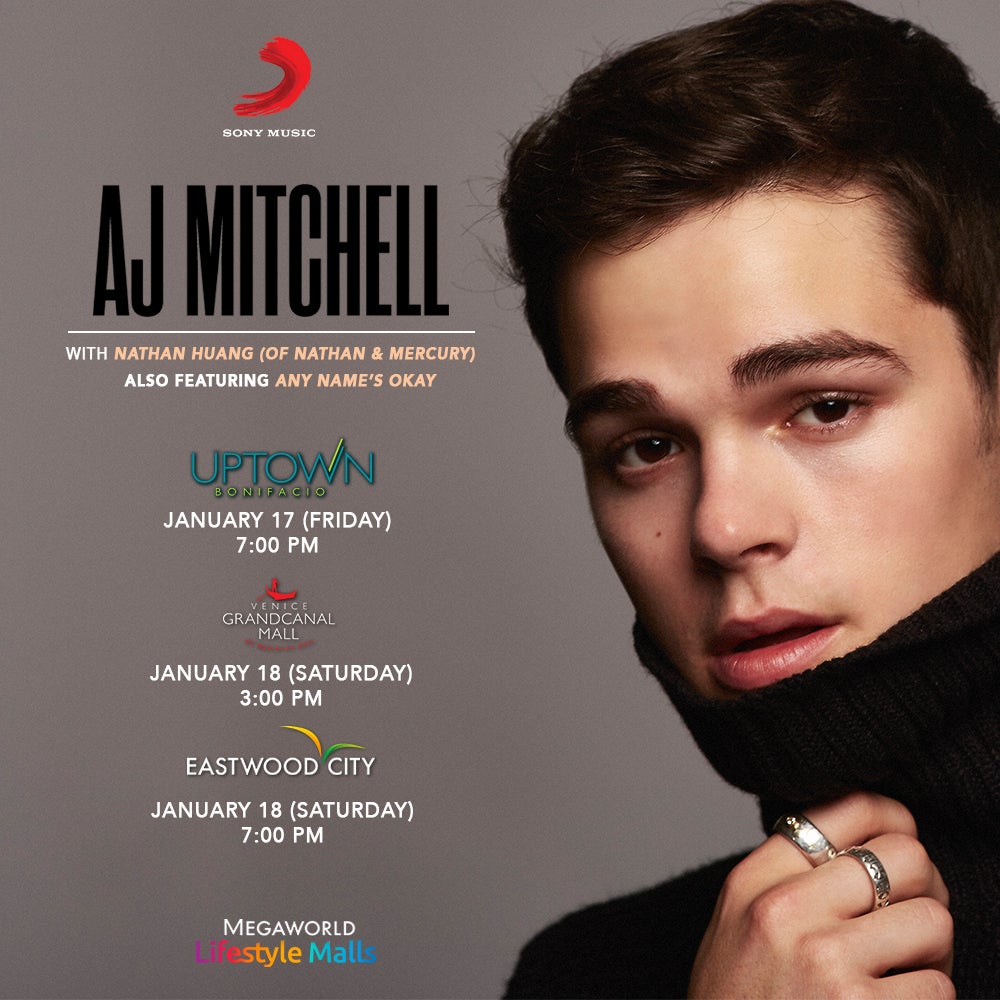 Getting to know AJ Mitchell

With a slick and show-stopping voice, charismatic personality, and sharp songwriting chops, it’s no surprise that the fast-rising star has already charted three hits on the US top 40 radio chart in a span of less than two years: “Girls,” “All My Friends,” which peaked inside the top 25, and the Ava Max duet “Slow Dance,” now ranked #29 and still climbing.

In terms of streaming, AJ Mitchell has racked up more than 100 million streams and 4.15 million monthly listeners on Spotify, cementing himself as 2019’s most promising male artist.

Outside the US, the Philippines is considered to be one of the biggest music markets of AJ Mitchell, whose latest single “Slow Dance,” a collaboration with hit-maker Ava Max, is currently making waves in local streaming playlists and top 40 radio stations. “I was pleasantly surprised when I first learned this and I’m so excited to finally get to meet some of my Filipino fans,” the young musician/performer opens up about the warm reception on his previous and recent releases.

As for Ava Max, the pop phenom who has shown significant international attention with “Sweet and Psycho,” which topped the charts in 26 countries and landed a top 10 peak at the Billboard Hot 100 last year, the All My Friends singer has always been vocal about admiring her work ethic and talent. “Working with Ava Max was such an incredible experience. After sending her the track, she sent back her verse within hours. Even on the very first take she sounded so amazing that we immediately knew she was the one for the song.”

New album in the works

This year, AJ Mitchell will be releasing his debut full-length album under Sony Music. “This has been a wild ride so far and every day I think of how blessed I have been,” the budding pop personality reflects. “Over the next few years, I have so much more I hope to accomplish. Right now I can’t wait to finally release my first album called Skyview. Beyond that, I hope to have a #1 song, win a Grammy, go out on an international tour, and so much more.”

You can watch the official music video of “Slow Dance” on Youtube, and stream the track in its entirety on Spotify.