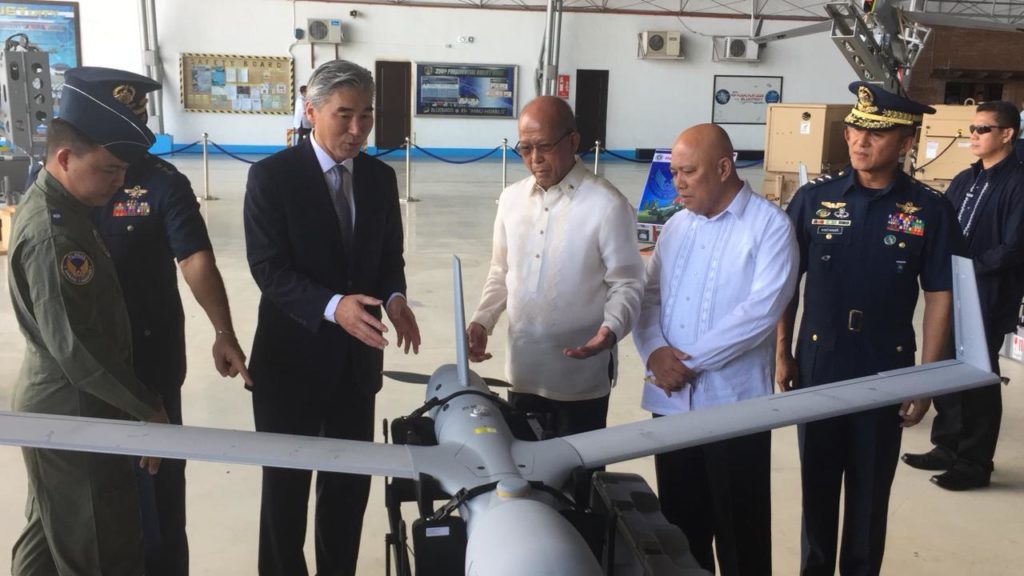 US ambassador to the Philippines Sung Kim (third from the left) and Defense Secretary Delfin Lorenzana. FRANCES MANGOSING/INQUIRER.net

A newly-set up intelligence unit of the Philippine Air Force is seen to boost the military’s intelligence, surveillance and reconnaissance (ISR) capabilities in the West Philippine Sea (South China Sea).

“As we celebrate the arrival of ScanEagle unmanned aerial systems, we would like to congratulate Lt. Gen. [Galileo Gerard] Kintanar and the first commanding officer of the newly-formed air and safety wing, Col. Baylon,” US Ambassador to Manila Sung Kim said in his speech on Tuesday.

The ambassador spoke at the turnover ceremony of six ScanEagle unmanned aerial vehicles to the Philippine Air Force. The drones, which were acquired through foreign military grant from the US, are worth $13.76 million (P687 million).

The UAVs would be turned over to the 300th Air Intelligence and Security Wing (ASW) and will be ready for use in about three months’ time.

“I understand that the ASW was recently upgraded from a group to a wing with subordinate manned aircraft and unmanned aircraft ISR groups. This is another proud achievement in the distinguished history of the Philippine Air Force,” Kim said.

A separate statement from the US Embassy said the 300th ASW will operate the aircraft out of Antonio Bautista Air Base in Palawan.

The military base is facing the West Philippine Sea, which represents the Philippines’ claims in the South China Sea. Other claimants of the hotly-contested maritime domain include China, Taiwan, Malaysia, Vietnam and Brunei.

Recent photographs published by the Inquirer revealed how China has almost finished its dramatic transformation of seven man-made islands claimed by the Philippines in the Spratlys.

The South China Sea, a vital sea lane, is rich in natural resources and billions of dollars of trade flows every year.

Kintanar said the new assets represent “a big leap forward in our technical capacity to acquire and process information through a reliable platform.” The drones are the first ever to be acquired by the armed forces, a “milestone” in the Philippine military.

The Air Force chief added that they requested the US for the unmanned aerial systems three years ago: “This project is three years in the making… but it’s certainly worth the wait.”

The “superb technical specifications,” he said, will be helpful in territorial defense security and stability, humanitarian and disaster response, and international defense and security engagement.

“This acquisition of ScanEagle UAV is one way to modernize the military to deter those who want to wage war against our country,” Lorenzana said. /je