A perfect night for Mitch Valdes in Bethlehem

By Nestor U. Torre 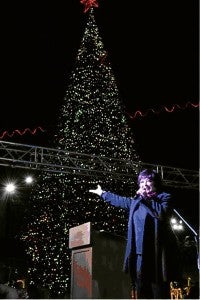 All of a sudden, it was the perfect night for Mitch Valdes to stage a pre-Christmas concert—right at Bethlehem’s Manger Square, where, according to tradition, Jesus was born 2,000 years ago.

Just the day before, rain and gusty winds threatened to ruin the show. But before the concert’s scheduled start on

Dec. 22, the skies cleared, bringing joy to hearts in the large international audience.

Other singers sang carols, leading up to Mitch’s hourlong show.

Everyone was primed for an enchanting evening of music and shared love and faith and of international and interdenominational peace and friendship—just what the doctor had ordered to soothe bruised feelings in the Holy Land and its environs.

Only weeks ago, the Israelis and the Palestinians rained rockets on each other, striking fear in the hearts of many and threatening to cancel Christmas in the Holy Land.

Journeys of Faith’s Arlina Onglao had come up with the idea of inspiring Filipino families to strengthen their bonds by spending Christmas in Bethlehem and other religious sites in the Holy Land.

Many signed up to join the special tribute to the Holy Family, with Mitch’s show as the tour’s musical highlight.

But the fear of being caught in the crossfire made some hesitate to go.

Stay home, don’t go; it’s dangerous, they said. And some indeed decided not to go.

But thanks to cooler heads, the Israelis and the Palestinians accepted a ceasefire, clearing the way for pilgrims to celebrate Christmas where it all began.

Arlina and Mitch, who had never felt deterred by the conflict, got the green light to proceed with the show.

Mitch’s “Songs from the Heart at Christmas” concert was conceived by Journeys of Faith and its counterpart in the Holy Land, Eternity Travel. The Palestinian Authority (TPA) sponsored it as a celebration of faith and music.

In that troubled part of the world, the need for love and peace is particularly urgent. And for the many who had looked forward to the show’s coming to town it came as a respite from fear and an opportunity to recall the birth of the Christ and its promise of redemption for the whole world.

Adding warmth to the holiday atmosphere was the presence of many Filipino migrants working in Israel, organized by Mila Lastimoso. They were spending Christmas away from their families so Mitch’s show just days before Christmas Eve was the communal celebration they were all longing for.

And Mitch Valdes did not disappoint them. The challenge of singing outdoors on a cold night threatened to take its toll on her voice, but she soldiered through and delighted the mixed crowd with her repertoire’s astute combination of Filipino carols, breezy entertainment numbers, some stand-up comedy, and songs that even people from other lands could groove to.

Some of the songs were foreign, but what came through at Manger Square that night was the heart and art of Filipino musical artistry, as ebulliently exemplified by Mitch Valdes.

Aside from performing really well despite the night chill, the total and international performer, accompanied in her rendition of some Filipino Christmas carols by Israel-based guitarist Nick Francisco, knew exactly how to adjust her singing and comedic “attack” to delight both the Pinoys and the foreign nationals in the audience, who constantly cheered her on with their laughter and applause.

There were some technical problems, but Mitch handled them with humor and flair, and the show came through as a big hit.

Mitch’s fellow pilgrims from the Philippines were bowled over by the evening’s rollicking success. Like Mitch, they had traveled a great distance and braved many challenges just to be a part of this special shared experience.

Many of the Filipino pilgrims had their loved ones with them, and that added to making the evening with Mitch, whom some of them extolled as the “Pride of the Philippines,” truly memorable.

From a great idea that temporarily became risky, the “Christmas in Bethlehem” pilgrimage and Mitch’s show ended on the side of the angels.

Even better, Mitch was invited to perform again with singers from other countries so the Filipino pilgrims and migrant workers in Israel have another musical reunion and memorable Christmas celebration to look forward to.