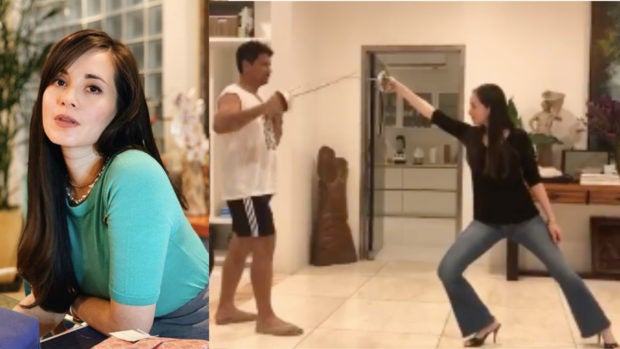 While others might celebrate their Valentine’s Day with chocolates and roses, celebrity couple Lucy Torres and Richard Gomez took a break from their respective duties as politicians to bond over fencing.

Torres seemed to be effortlessly learning the sport as she donned a pair of heels during their sparing session. Gomez admired his wife when he uploaded the video of their training on his Instagram account, today, Feb. 14.

Gomez coached his wife, who is a member of the House of Representatives, about the proper stance and steps when playing the combat sport. The couple’s only daughter, Juliana, was also present and was capturing the moment in her phone.

Torres appeared to be fully invested in the sparring match as she maintained the proper posture while Gomez instructed her on what to do. When Torres was finally able to achieve the move Gomez taught her, the two bowed their heads while holding up their weapons.

Besides being an actor, Gomez was a former SEA Games athlete who represented the Philippines in the fencing category. He is now an avid supporter of the country’s fencing team as the president of the Philippine Fencing Association.

Torres, meanwhile, was reelected as the representative of the 4th district of Leyte in Congress last year.  /ra