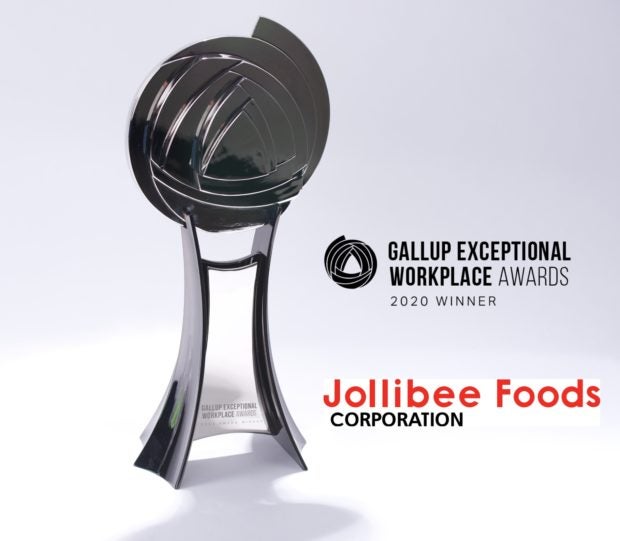 Jollibee Foods Corporation, also known as Jollibee Group, is the first ever Philippine-based company to be recognized with the Gallup Exceptional Workplace Award (GEWA), given to only 38 organizations worldwide whose cultures drive high engagement among its employees. Winners of the Gallup Exceptional Workplace Award put people at the heart of their business strategy, focusing on people’s strengths and coaching talents to reach their full potential, unleashing human motivation, creativity, and innovation as a result.

“This award is Gallup’s highest honor, presented only to organizations that meet rigorous standards of excellence. As an award winner, you rank among the most elite organizations around the globe,” said Gallup in its letter to the Jollibee Group.

In this year’s Forbes’ list of the World’s Best Employers, the Jollibee Group is one of only three Philippine-based companies that were cited.

Forbes partnered with market research firm Statista to survey 160,000 employees from 58 countries who were asked to rate their willingness to recommend their own employers to friends and family. They were also asked to rate their satisfaction with their employers’ Covid-19 responses and score their employers on image, economic footprint, talent development, gender equality and social responsibility.

“We are honored to receive these global awards that reflect the kind of organization and strong culture of Jollibee Foods Corporation. We take pride in having professionals in our teams who are not only excellent in what they do, but also live the values that make the Jollibee Group what it is today,” said Jollibee Group President and CEO Ernesto Tanmantiong. “We know that a company is only as strong as the quality of its people, and it is our people who incessantly inspire us to be better.”

“To all our teams across the world, thank you for your commitment and trust in the Jollibee Group. We will continue to uphold the culture and values that have made us who we are and develop programs that will continuously uplift our teams,” Tanmantiong added.

The Jollibee Group has a dedicated People Agenda in its business strategy, characterized by a people-focused culture, strong talent pipeline, and highly engaged teams. The organization is defined by its values of customer focus, speed with excellence, humility to listen and learn, integrity, and spirit of family and fun. Despite challenging external factors, employees remained resilient and engaged with the Jollibee Group mission of serving great-tasting food, bringing the joy of eating to everyone.

In previous years, the Jollibee Group has also received global citations—named as Philippines’ most admired company by the Asian Wall Street Journal for ten years and honored as one of ‘Asia’s Fab 50 Companies’ by Forbes Asia Magazine.

Jollibee Group is one of the fastest-growing Asian restaurant companies in the world with 16 brands including Jollibee, Chowking, Mang Inasal, Greenwich, Red Ribbon, Burger King, The Coffee Bean & Tea Leaf, Smashburger and has a joint venture with the Tim Ho Wan Group to open Michelin-starred Tim Ho Wan restaurants in Mainland China.

Jollibee Group is a significant investor in Titan Dining LP, a private equity fund and the ultimate holding entity of the Tim Ho Wan (THW) Brand and has a joint venture with the THW Group to open THW restaurants in Mainland China. It also has a business venture with award-winning Chef Rick Bayless for Tortazo, a Mexican fast-casual restaurant business in the United States.

Jollibee Group was named the Philippines’ most admired company by the Asian Wall Street Journal for ten years. It was also honored as one of Asia’s Fab 50 Companies and among the World’s Best Employers by Forbes. In 2020, Gallup awarded the Jollibee Group with the Exceptional Workplace Award, making it the first Philippine-based company to receive the distinction.

Jollibee Group has grown brands that bring delightful dining experiences to its customers worldwide, in line with its mission of serving great tasting food and spreading the joy of eating to everyone.