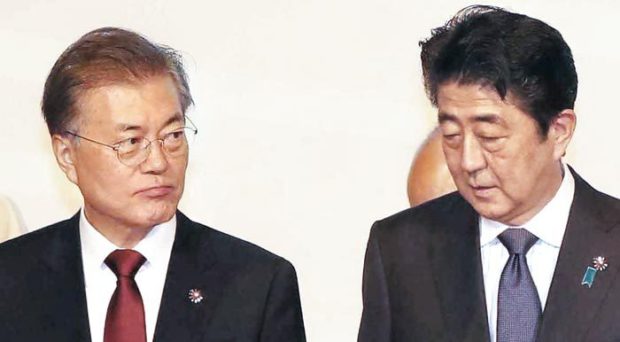 Early in July, Japan imposed export curbs on three materials to Korea crucial for making smartphone chips or displays. The move had been anticipated after Korea’s top court ruling in October last year that Japanese wartime companies should compensate for Korean forced laborers during its 1910-1945 occupation.

“As the Japanese cabinet-level officials have mentioned multiple times, Japan’s export control is a politically motivated step related to our court’s ruling on forced labor and aimed at our country directly,” said Yoo.

According to the Ministry of Trade, Industry and Energy, Japan has violated key principles of free trade enshrined in the international trade regime, which prohibits “unfair treatment” among member countries.

According to the WTO regulations, each member state is banned from taking discriminatory measures on another. Therefore, in the ministry’s view, every member country should be regarded among the “Most Favored Nations” when trading goods and services.

Since the Japanese government stripped Korea of preferential status for three key materials in July, Japanese manufacturers are required to apply for approval for each export to Korea, rather than going through simpler checks granted to preferential trade partners.

“The Japanese government’s decision to change from overall approval to one-by-one approval for its trade with Korea was a violation of the nondiscrimination principle, particularly MFN treatment principle,” Yoo said.

The government also suggested that Japan has violated Article 11 of the General Agreement on Tariffs and Trade, which bans regulations on export volumes unless the products have a serious impact on national security.

The Japanese government has argued that the decision to curb the exports of strategic materials to Korea was based on national security concern. Tokyo has suggested possibilities that the materials could have been smuggled into North Korea due to South Korea’s lax oversight.

The Korean government, however, has refuted, saying that it would be difficult for Japan to justify its trade restriction based on national security concerns because such a clause was applied under “extraordinary circumstances” such as a wartime contingency.

Now that the Korean government has filed a complaint with the WTO, its dispute settlement process will soon take place, starting with bilateral consultations. If the Japanese government accepts the procedure, the two parties should engage in negotiations for at least 60 days.

According to Trade Minister Lee, it is “theoretically not impossible” for Japan to reject the idea of bilateral consultations.

If the bilateral consultation fails to deliver a settlement, then Korea can ask the WTO to establish a panel to deliver a ruling. The panel review process is usually complete within six months of being launched with the participation of a third-party state.